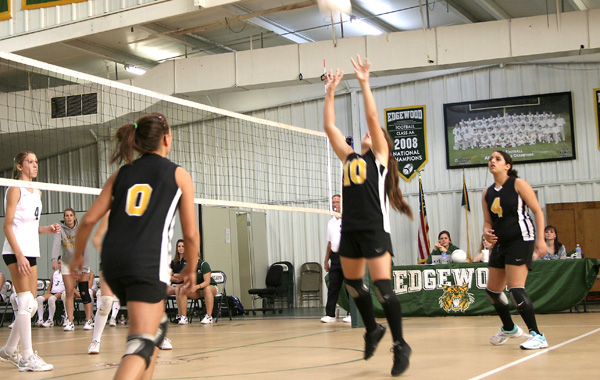 The Meadowview Christian School junior varsity volleyball team made school history as they achieved perfection and captured a state championship.

The Lady Trojans completed a perfect 18-0 season on their way to the school’s first ever volleyball state championship of any kind, as they swept the competition at the state tournament at Edgewood Academy in Elmore on Saturday.

Meadowview volleyball coach Robby Redd said the key to the perfect season was that his team kept pushing forward.

“The key was just perseverance,” Redd said. “I mean, they just worked really hard all year and they didn’t lose their cool at any point.”

Meadowview opened play against the Edgewood Academy Wildcats and won the match 2-1 behind service runs from Emily Dennis, Jeni Redd and Kinley Vardaman.

In their next match, the Lady Trojans were led by Christina Dabit as they defeated Cornerstone Christian 2-0.

The perseverance that Redd spoke of would show in the best two-of-three championship match, as the Lady Trojans needed a comeback to capture the state crown.

In Meadowview’s second meeting with Edgewood, the Wildcats jumped ahead in the first set 7-1, but the Lady Trojans would not be denied.

Redd said his team did not give up despite trailing in the title game.

“In the championship games they were six or eight points behind in the first game,” Redd said, “but they believed in themselves enough to win, and they stuck with it.”

The second set was close early, but Edgewood would pull away for a 15-7 lead mid-game.

The Lady Trojans would come back and tie it up at 25 with Jeni Redd serving.

Edgewood battled back to win the second set, 28-26, but the Lady Trojans would respond.

In the third and deciding set, Meadowview took the lead and never looked back, winning the state championship by a decisive 15-7 score.

In addition to her role on the state championship team, ninth grader Claudia Kendrick was named Most Valuable Player of the tournament for the Lady Trojans.

Redd said the championship is something for the entire Meadowview family to share.

“The entire school has gotten a little more belief in themselves that they can still win,” Redd said. “Meadowview used to be a powerhouse in this area and in this state, and they realize that we may be able to do that again.”

The Ellwood Christian Academy Eagles are working hard on both sides of the ball to improve, head coach Mike stokes... read more