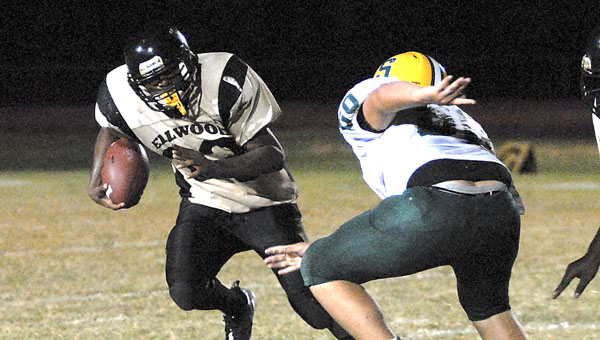 Ellwood Christian Academy’s Denzel Smiley looks for running room in a game against Sparta Academy earlier in the season. The Eagles will travel to LaFayette Friday night to take on Chambers Academy. -- File photo

The Ellwood Christian Academy Eagles are looking to put another tough loss behind them when they hit the road Friday night.

Ellwood head football coach Mike Stokes said he and his staff has been trying to maintain the team’s morale in the midst of a losing season.

“We’re just trying to keep their spirits up, keep playing and make sure they don’t give up,” Stokes said.

Stokes said the Eagles are still trying hard for their first victory of the season, but the remaining opponents aren’t getting easier.

Stokes said the Eagles will have to minimize mistakes and play tough defense in order to have a shot at winning Friday’s game.

“We need to control the ball, keep their offense on the sidelines, try to sustain some long drives on offense and eat up the clock,” Stokes said.

Stokes has also been simplifying things in practice to try and help improve the Eagle’s chances of winning.

“We’re just going to cut down on a lot of things that we tried to do. We’re just gong to get us eight-to-ten plays that we can stick with and we can do,” Stokes said.

“We were trying to do too much because I see we were trying to put a lot on them (the players) and it’d cause them to over think and get confused, so we’re going to get eight-to-ten plays and work on those from here on out.”

Selma hopes to bounce back