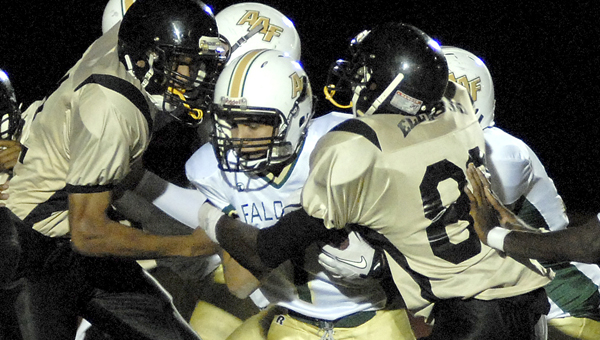 The Ashford Academy Falcons blew away the Ellwood Christian Eagles Friday night at Memorial Stadium, in a game that was far less of a battle between two fearsome birds and much more of a turkey shoot.

The Falcons scored touchdowns on all four of their first half possessions, and in fact, added two more touchdowns on drives that were under the control of the Eagles.

Already down 14-0 with less than a minute to play in the first quarter, Ellwood lined up to punt the ball away, but the play was completely broken up as a rush of Falcon defenders broke through the line and blocked the kick.

Ashford’s Gil Bauer, a defensive lineman, picked up the ball and rumbled 55 yards for an Ashford touchdown. Ashford would add a two-point conversion, extending their lead to 22-0 with 58 seconds to play in the first quarter.

Ellwood would go three plays and out on their next possession and successfully punted the ball away, but that only set up Ashford’s next score.

The Falcons would further stretch their lead, going 66 yards on eight plays for a touchdown with 7:16 to play. Again, the two-point conversion was good, giving Ashford a 30-0 lead.

On Ellwood’s next possession, it appeared the Eagles would get their running game going, as they were able to record just their second first down of the game. But, on a first and 10 from the Ashford 44-yard line, the Eagles would fumble — a fumble that was picked up by Ashford’s Trey Johnston who took it back for a touchdown with 4:46 left to go in the first half. The extra point was no good, leaving the score 36-0.

Again, Ellwood was forced to punt after just three plays on their next possession, handing the ball back to Ashford with 2:35 left in the half. Ashford would again go 66 yards, this time on just seven plays for their sixth and final touchdown of the half.

This time, Johnston would find Alex Morris for a 5-yard touchdown strike with 27 seconds remaining in the half. The extra point was good, giving Ashford a 43-0 lead at the half.

“Right now we are getting our butts kicked,” Ellwood head coach Mike Stokes said following the game. “We have a lot of young players who are still learning the game and taking their lumps. It won’t be long before we have the experience and talent to where no one would want to play us.”

In the second half, with a running clock, Ellwood’s defense was able to hold Ashford scoreless, often times stopping the Falcon’s No. 1 offense — an accomplishment they were clearly unable to do in the first half.

“I keep telling I keep preaching to the players about playing a full game,” about playing four quarters, Stokes said. “We will go out and not do anything in the first half and then play well for two quarters, or just the opposite.

“But we are still learning.”

Ashford racked up 326 yards of total offense on the evening, compared to Ellwood’s 121. Ellwood will take to the road next Friday night when they take on Chambers Academy. With the loss, Ellwood falls to 0-7 on the season, while Ashford improves to 3-4.