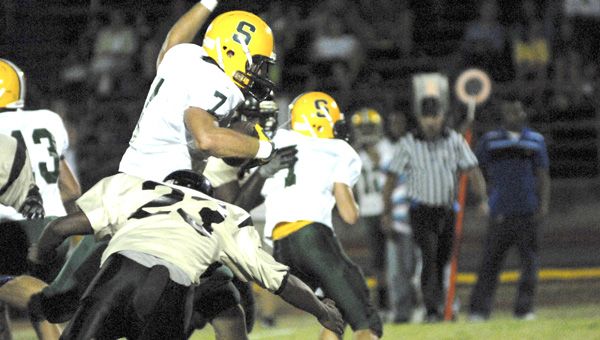 Ellwood Christian Academy head coach Mike Stokes said the Eagles’ record does not reflect the progress his team has made. Though they are 0-6, Stokes said the team has continued to show progress in every game. The Eagles will host Ashford Academy Friday at Memorial Stadium. -- Robert Hudson

The Ellwood Christian Academy Eagles football team will be looking to improve and capture its first victory of the season Friday night.

Ellwood head football coach Mike Stokes said his team is still improving from week to week in its first year of 11-man football.

Stokes said the Eagles will benefit from playing at home, but they still have to take care of business on the field.

“It’s always good to play at home with your fans there supporting you,” Stokes said. “But you still have to go out there and play football.”

Stokes said the Falcons are a great running team with two running backs that can do some serious damage to opposing defenses.

“They have two really good running backs and they’re going to run the Wing-T,” Stokes said. “The good thing about it is we’ve got coach Lem Jones over here … he basically invented the Wing-T. He ran it for about 25 years, so we’re counting on him as defensive coordinator to stop it and put players in the right place.”

Stokes said, in order to have a chance to win Friday night, the Eagles will have to be disciplined and not get caught up in the Falcons’ misdirection offense.

Three individuals from the Black Belt will be inducted into an elite group. The Alabama Independent School Association has announced... read more