Dallas County looking for a win 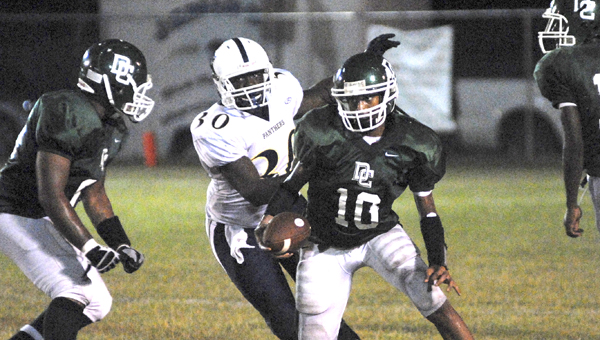 The Dallas County High School Hornets football team is trying to make sure an 0-4 start doesn’t shake its confidence for Friday’s game and beyond.

Dallas County head coach Willie Moore said he and his staff are trying to maintain positive morale during a rough patch in the season.

“We’re just trying to make sure our kid’s attitudes are good, and so far, so good,” Moore said. “The kids have been real enthused in practice. Being 0-4 … it’s not good, but our kids, one thing about being young, they’re resilient, so we’re pleased with where we are.”

Moore said the his team will have to contend with a one of the quickest team’s it will see all season when it travels to Greensboro.

“We’re playing a team that’s got tremendous skill and athletes that are very fast,” Moore said. “They’re probably going to be one of the quickest teams we play thus far.”

Moore said Greensboro runs the spread on offense, and utilizes their speed defensively through corner and safety blitzes.

Greensboro’s speed, Moore said, has been tough to prepare for.

“One thing we can not do right now is simulate that type of speed in practice because we’re nowhere close to having the kind of speed and quickness they have, so simulating that on scout team is tough,” Moore said. “Our kids really don’t know how fast it’s going to be until game time and that’s not the right time to find out the speed and quickness of the team you’re playing. That’s one thing that’s probably going to be a negative for us as far as preparation is concerned.”

In order to get the win Friday night, Moore said the Hornets will have to do something they couldn’t in last week’s 35-10 loss at Holt—score in the red zone.

“When we get in the red zone, we’ve got to be able to put points on the board, and that’s the name of the game,” Moore said. “If you come away with six points each time, that gives you an opportunity to be in the game. We’ve just got to make sure we’re consistently good when we’re in the red zone and come away with points.”

Southside cutting down on mistakes

The Southside High School Panthers will have to hold off the Keith defense in order to eliminate turnovers and finish... read more