Southside cutting down on mistakes 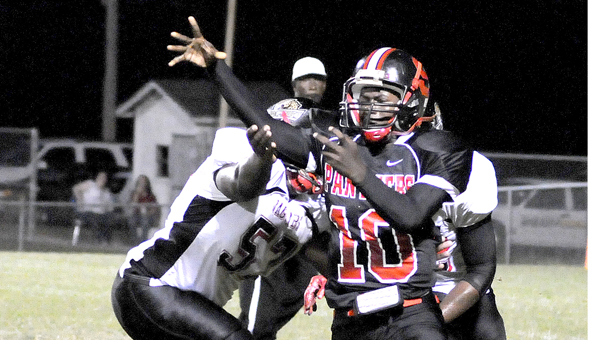 The Southside High School Panthers will have to hold off the Keith defense in order to eliminate turnovers and finish drives Friday to have a chance to win. -- Tim Reeves

The Southside High School Panthers football team will be looking to bounce back from last week’s crushing loss when it takes a short road trip to Orrville Friday night.

“They run the Wing-T, are pretty well coached, and they are very athletic,” Crum said.

“Hopefully, we can get them in third-and-long situations and force them to pass,” Crum said. “We need to be consistent on first and second down and limit their big plays.”

One thing Crum said the Panthers need to do is limit their turnovers if they want to win.

“I think we had five turnovers last week,” Crum said. “We also need to focus on the fundamentals of tackling and blocking.”

Crum said the Panthers will also have to finish drives offensively in order to beat the Bears.

“We got in the red zone last week about three or four times and came away with no points,” Crum said. “This week we’re going to try to focus on finishing drives once we get inside the red zone.”