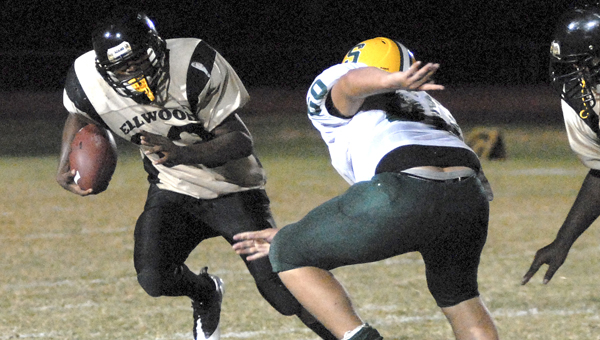 Ellwood running back Denzel Smiley tries to hit the corner against Sparta Friday night. The Eagles are still looking for the first win of the season. -- Robert Hudson

After a scoreless first quarter of what looked to be a tough game, the Sparta Academy Warriors were sparked by a 27-point second quarter as they went on to defeat the Ellwood Christian Academy Eagles 48-0.

“I think our kids just finally came together and played hard together,” Mike Bledsoe, head coach of Sparta Academy. “They just wanted to win.”

After another tough loss, the Eagles are left to pick up the pieces and try to improve for next week.

“We’re going to go in Monday for practice and go hard at everything,” said Demarcus Powell, sophomore running back for Ellwood. “We slacked up and we didn’t play as hard as we could. We’ve got to go in next week and go hard, go strong and move on.”

The Warriors would get on the board in the second after a scoreless first quarter when running back Dalton Baggot capped off a short drive with a 1-yard touchdown run to make the score 7-0 with 10:55 left in the second.

After forcing the Eagles to put, it was Baggot who answer the call again for the Warriors, as he scored a 2-yard touchdown run to make the score 14-0 with 2:53 left in the second, and cap of a nine-play 30-yard drive.

Pent back at their own goal line, the Eagles would fumble in the end zone and Sparta defensive linemen Brooks Carpenter recovered it for a touchdown to put the Warriors up 21-0 with 2:41 left in the second.

The Eagles would have their punt blocked in their own territory the following possession with 0:49 left in the half.

Sparta quarterback Allen Stuart would pound it in five plays later to make the score 27-0 at the half.

Sparta racked up 287 yards of total offense including 129 rushing yards on the ground from Baggot.

The Warriors held the Eagles to 51 yards of total offense.

The Eagles will take the field again next Friday night on the road at Abbeville Christian Academy.