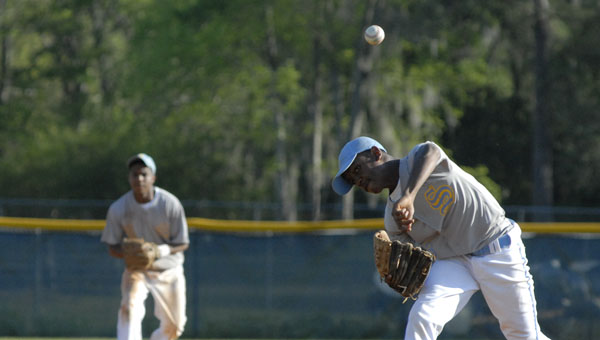 Keyshawn Ford fires a pitch to the plate in Selma’s 11-4 loss to Demopolis Friday afternoon at Bloch Park. The Saints started the game hot, but their bats cooled off in the late innings. -- Chris Wasson

The Demopolis Tigers picked up their second series win in as many days Friday at Bloch Park in Selma. The Tigers (7-9, 2-0) took down the Selma Saints 11-4 to take the area series. “I said yesterday that we would come back home and play better and we did,” Selma head coach Reggie Glover said. “I’m not content with how it ended up, but I’m proud of the guys for coming out and playing hard.” The Saints started the game hot.  Billy Daniels led off the top half of the first inning with a walk. After two outs, Derrick Billingsley walked and Jasmike Smith singled to drive in Daniels and Anthony Blake followed with a single of his own, driving in Smith and Daniels. The Tigers took a couple of innings to get going, but in the bottom of the third, four consecutive hits led to three runs to tie the game. Demopolis would take their first lead in the top of the fourth. Taylor Polk walked and scored on an RBI single by Cole Thrasher. The Tigers were able to get another two runs in the top of the fifth to form breathing room and push out for the win. “We didn’t play well, but we got the win,” Tigers coach Ben Ramer said. “You never really know what you’re going to get with this team. We just have to work on keeping our heads in the game.” With the first area series lost, the Saints must work hard to take the next two if they want to make the playoffs. “We dropped this series and we knew that we would have to take one from either Demopolis or Greenville,” Glover said. “Now we have to work hard and win the rest of the game if we want to make it to that point.” The Saints will have their chance to get back in the playoff picture next Thursday and Friday when they play Greenville in a home and home series.

The Dallas County High School track team was back in action for the first time in several years Thursday and... read more