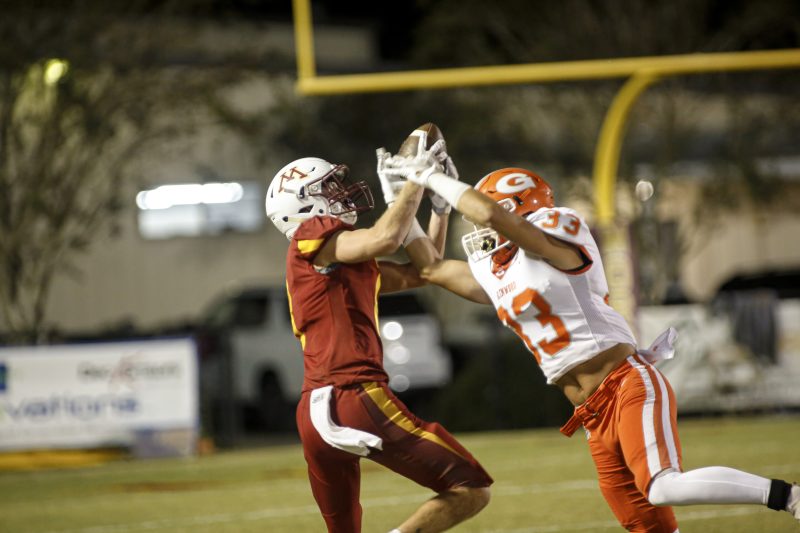 The Glenwood Academy Gators ran away in the second half en-route to a 63-32 win over Morgan Academy on Friday Night.

“They don’t ever quit,” head coach Danny Raines said. “They kept playing well. They made several plays. They played hard. That’s a really good football team we played but our kids never quit.”

Morgan Academy and Glenwood went back and forth in the first half, scoring a combined 55 points.

The Senators could not find an answer for Gators senior running back JT Banks.

With 4:50 left in the first quarter the Gators drew first blood. Quarterback Dallas Crow scored on a QB keeper from 12 yards out, giving the Gators a 7-0 lead.

Morgan Academy found paydirt on 2-yard QB keeper from senior TB Clements. The Senators scored on a two point conversion for a 8-7 lead.

With 9:05 left in the first half Glenwood struck again. Crow connected with Brandon McCraine for a Gators touchdown to lead 14-8.

The Gators  found the end zone again, thanks to a Banks rushing touchdown, leading 21-8.

Morgan Academy responded as Clements connected with Rhyne Williams for a 30-yard touchdown, cutting the gap to 21-14.

Morgan Academy answered, as Clements scored on a keeper to make it 28-20.

The final score of the half came with 24.7 left in a bang bang play in the end zone as Glenwood scored and led 35-20 at halftime.

Crow scored on a 20 yard keeper in the third quarter as Glenwood extended the lead to 42-20.

Glenwood scored again on a 38 yard run from Aaron Burton,  making the score 49-20.

Morgan Academy responded with a 27 yard touchdown pass from Clement to Allen Lightfoot late in the quarter, getting within 49-26. Glenwood put things away late in the quarter with a scoring  run from Banks from 9 yards, leading 56-26 after three..

Glenwood padded its lead in the fourth quarter on a 20 yard run from Burton with 11 minutes left to lead 63-26. Morgan Academy finished the game off on the right foot finding the end zone with 10.3 seconds left on a rushing score by Josh Allen Ingram for the game’s final score.