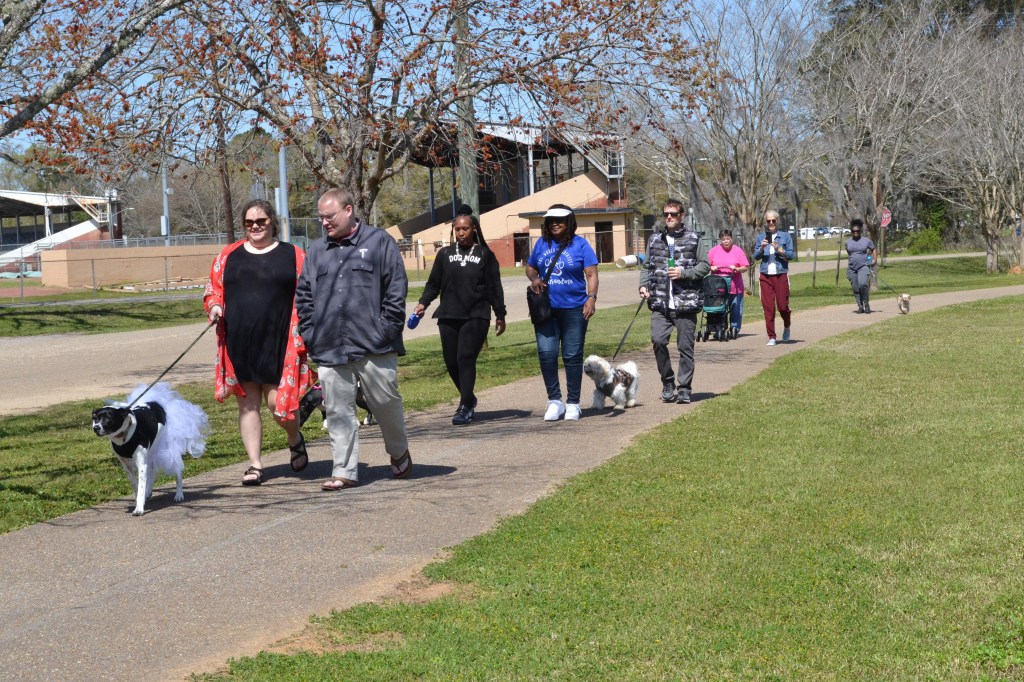 Dozens of residents from Selma and surrounding communities brought their pets, some adorned with costumes, to the Bloch Park Pawrade held Saturday at Bloch Park.

The event, coordinated by the Selma Charity League, served as an opportunity to bring people together while also collecting money and food donations for the Selma Animal Shelter.

“I think it was a great turnout,” said Kimberly Levins, Selma Charity League President. “I think it’s something we’ll be able to grow in the future and have a lot more participation in the future. We had a majority of dogs and one cat.”

Levins said it was great to see people get into the spirit of the event and dress their pets in costumes. She added some of her favorites were an owner and pet dressed as Beauty and the Beast, twins with poodles who were wearing poodle skirts and a pair of dogs in Alabama jerseys since she’s a fan of the Crimson Tide.

“I think everyone did a great job that dressed up,” she said.

Participants in the pawrade gathered at a donation table set up by the league. Those who donated received their choice of a leash, collar, pet toy or other pet-related items donated by the Dallas County Commission.

Upon completing a lap around the walking track, the pet owners and animals were given a medal for their participation.
Levins said the event raised more than $150 dollars in cash to go with the pet food donations received.

She added it was great to see people making some new friends.

“A lot of people were joking about picking up a monthly dog date and keeping on doing this because it was fun for those to get out and socialize,” Levins said.

Camryn Allday, a Selma resident who has volunteered at the animal shelter since her freshman year of high school, brought her dog, a red-nosed pit bull/blue heeler mix named Bug, to the event. She dressed Bug up as a spider.

“We love to support Selma in anything we can do, and we love our dogs,” she said. “We love to get them out and do anything. Anything to get them dressed up in all honesty, we’re going to be here.”

Heidi O’Quinn, a Selma Charity League member, dressed her bird dog, Pepper, in a pepper shaker costume she made herself. O’Quinn said not only did she want to support the fundraiser, but she also wanted to take advantage of the opportunity to meet other pet owners in the community.