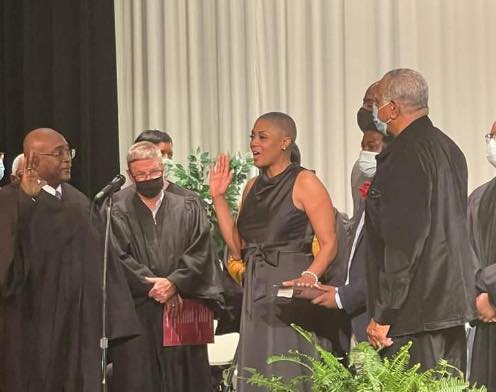 Tears streamed down the joyous face of Vernetta R. Perkins minutes before she was sworn in as Dallas County District Court Judge.

Perkins was officially sworn in on December 9 at Selma High School before family, friends and fellow judges. Perkins is the first female African-American District Court Judge in Dallas County.

Words of gratitude and humility fell from Perkins’ lips during her remarks.

“I’m not special, I’m a product of the culture that created me and the Grace of God,” Perkins said. “I was given purpose. I’m ready to serve.”

The love and support for Perkins in the local Government was felt throughout the program.

“Vernetta Perkins needs time to settle in as Judge, she won’t be Thurgood Marshall right off the bat,” Jackson said