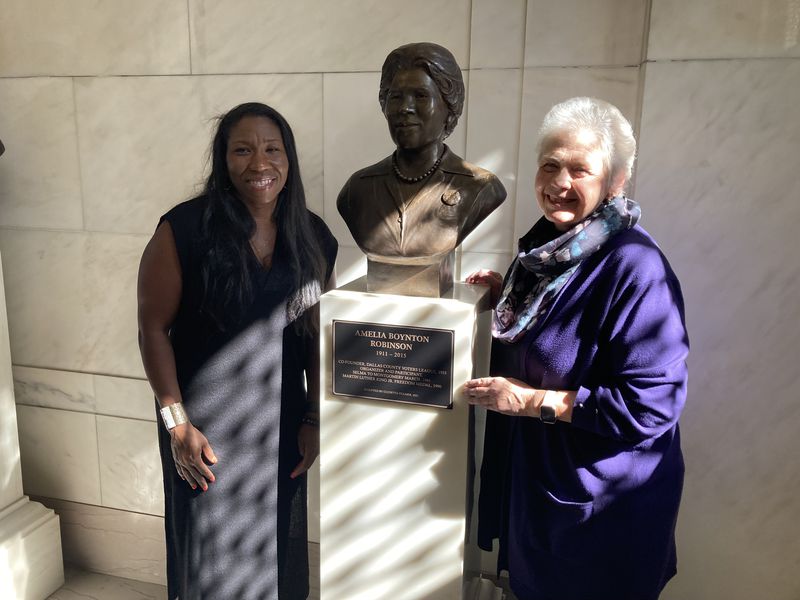 Carver Boynton, left, and Clydetta Fulmer post with bust of Amelia Boynton Robinson. Boynton is Robinson’s granddaughter, while Fulmer is the artist who created the sculpture./Associated Press

A Selma Civil Rights Icon received a bust by the Alabama Department of Archives History on Monday in Montgomery.

Amelia Boynton Robinson is one of two women who received a monument at the ADAH Statuary Hall.

The other woman honored Monday was Pattie Ruffner Jacobs, who founded the Alabama Equal Suffrage Association.

Family for both women attended the event, followed by a program.

Boynton Robinson was one of the Courageous Eight and Foot Soldier who invited Martin Luther King Jr. and the Southern Christian Leadership Conference to Selma in 1963.

Boynton Robinson, who died in 2015, became the first black woman to run for Congress in Alabama.

Carver Boyington, Boynton-Robinson’s granddaughter said her grandmother, encouraged everyone to carry on activism.

Young said it was an honor to attend the ceremony.

“I am so proud and thankful for the legacy of this great Lady,” Young said.

Gov. Kay Ivey, who attended the ceremony, said both women are an important part of American history.

“The women brought a real and lasting change “to both your state and your country, without them, there’d be no Condoleezza Rice or no Kay Ivey,” Ivey said.