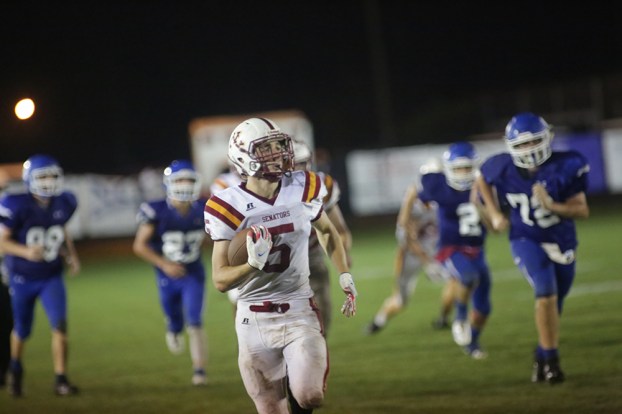 Cink Minter used Morgan Academy’s 36-12 victory at Southern Academy on Friday night to announce the short-handed Senators are not without big-play threats despite a key injury.

Minter scored four touchdowns, including a 60-yard punt return in the third quarter for No. 9 Morgan Academy’s final score of the night. The Senators dominated the first half and substituted freely in the third and fourth quarters.

“It was good to see us throw and catch it tonight. I’m really glad to see Cink have the night he did. That’s a night he’ll always remember.”

One week after being limited to five possessions in a 12-9 loss to Monroe Academy, a game that saw the Senators’ leading receiver, Rhyne Williams, suffer a broken collarbone, Morgan Academy (3-1) scored four touchdowns in the first half.

Quarterback Andrew Thomas picked up the first TD on a 4-yard keeper on a possession set up by a Perrin Utsey fumble recovery.

Trey Jones recovered another Southern Academy fumble, and Thomas found Minter for a 28-yard TD and a 13-0 lead.

Utsey came up with a strip sack of Southern Academy quarterback Campbell Webb, and the result of the play was a safety and 15-0 Senators advantage.

Thomas connected with Minter on the ensuing possession for a 9-yard score. Thomas found Minter again late in the half on a 42-yard catch-and-run to the end zone, pushing the margin to 29-0.

Minter finished with six receptions for 140 yards. John Allen Ingram ran 11 times for 90 yards for the Senators, and Thomas completed 8 of 13 passes for 167 yards.

The Senators held the Cougars (0-4) to 108 yards of total offense, including just 8 through the air.

Southern Academy’s touchdowns came on runs of 51 and 15 yards by McGuire Davis.

By Lew Gilliland The Selma Times-Journal Week 3 of the 2021 season proved painful in more ways than one for... read more