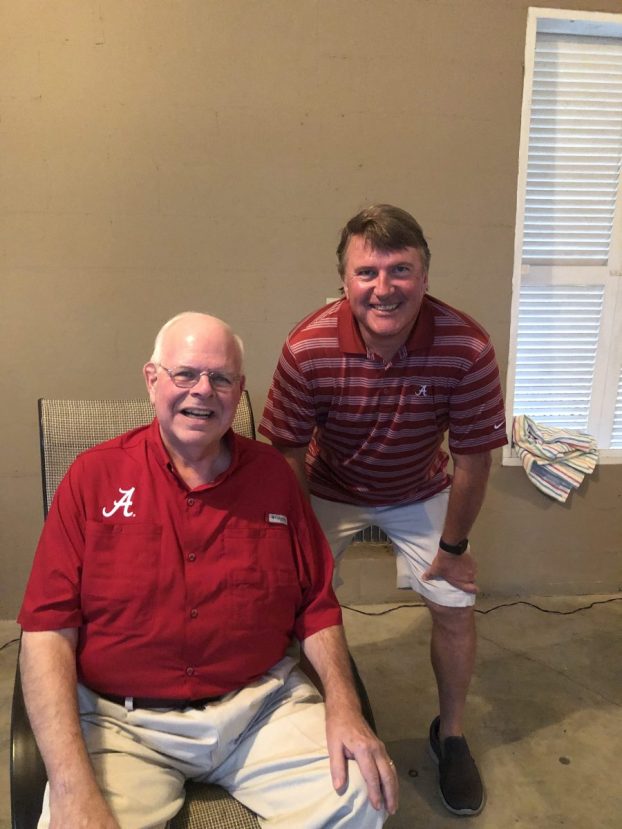 “We’ve been trying to do this for a while,” Gold said.

Gold addressed countless subjects surrounding the Crimson Tide football team past, present and future as well as the COVID-19 pandemic.

“It’s good to be back with a degree of normalcy,” Gold said. “There’s still a lot of concern.”

“What a year last year – Saban would slap me if he knew I was talking about last year,” Gold said. “He did a fantastic coaching job last year. With all the COVID stuff and canceling games and he missed coaching one with COVID. And he still won the National Championship. It was an amazing performance.

“Of all the magnificent things Saban has done at Alabama, there’s none better than last year. It was a quite a season.”

Gold said he enjoys working with Saban, who has guided the Crimson Tide to six national championships.

“It truly is a treat to work with Nick Saban,” he added. “But he really is not the person you see behind podium on Mondays and Wednesdays. He’s really a nice man. He knows football, has a nice sense of humor and cares about people. He loves his players. He and his wife, Mrs. Terry Saban, have built homes for 18 families through Nick’s Kids and Habitat for Humanity.”

Gold said Saban’s unique focus has made him the greatest coach of all time.

“Saban is the most focused human being I have ever dealt with in my life,” Gold said. “He is a hard worker when it comes to recruiting. Saban and his coaches don’t miss a beat..”

Gold likes Alabama’s chances of repeating as national champions despite having a new coaching staff and losing several players to the NFL.

“This is another new team,” Gold said. “With so many new coaches on staff that are the best of the coaching world, but even with newcomers there has not been an inch of transitional problem.It’s still Saban’s offense and defense. They’re just massaging things.”

“Bryce Young is outstanding,” Gold said. “The guy has got an outstanding arm. He understands the game and is a student of the game.”

“Greg Bryne is a great people person and a great fundraiser, the Alabama Athletic Department is in great hands,” Gold said.