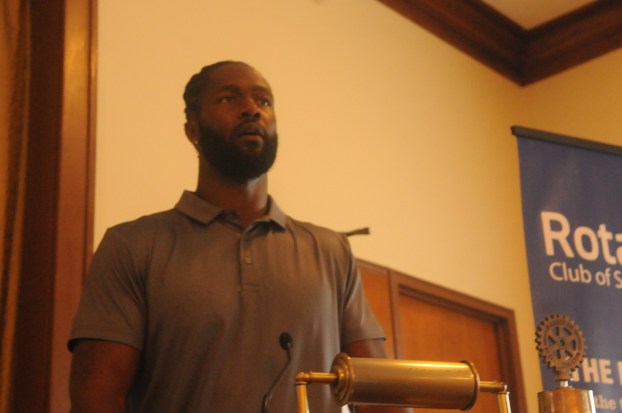 With his NFL career behind him, Michael Johnson looks toward the future in Dallas County.

Johnson spoke Monday at the Rotary Club and unveiled part of his plans for Selma and Dallas County. He runs the Michael David Johnson Foundation

“I’m looking forward to getting involved in Selma and Dallas County,” Johnson said. “We have a gold mine in Selma. We have so much to take advantage of. “

Johnson, who played defensive end for 10 years, nine with the Cincinnati Bengals, said he plans to establish a business in the Queen City, a restaurant lounge type facility.

“We don’t have a place to watch football around here on Sunday nights,” Johnson said. “Sunday night football is big in a lot of towns in the country.”

Johnson, the Valedictorian in Dallas County High School Class of 2005, said togetherness is the key for Selma and Dallas County to achieve success.

“We have to work together, we have to support each other,” Johnson said. “It takes a village, all of us. I believe in Selma.”

Johnson spends his days as a mentor at the YMCA. On Saturday, the annual Family Fun Day/Back to School Giveaway will be held from 11 a.m. to 4 p.m. at the YMCA.

“It’s cool being a mentor and working with kids,” Johnson said.

After high school, Johnson signed a scholarship with Georgia Tech and was an All-ACC selection between 2005 and 2008. He eventually returned to Georgia Tech in 2015 and earned a college degree.

Cincinnati picked Johnson in the third round of the 2009 NFL Draft.

“I don’t miss training camp,” Johnson joked. “I miss the competition and playing in front of 80,000 fans. I miss jiving with the guys in the locker room.”

Johnson hung up his cleats two years ago, but doesn’t consider himself retired.