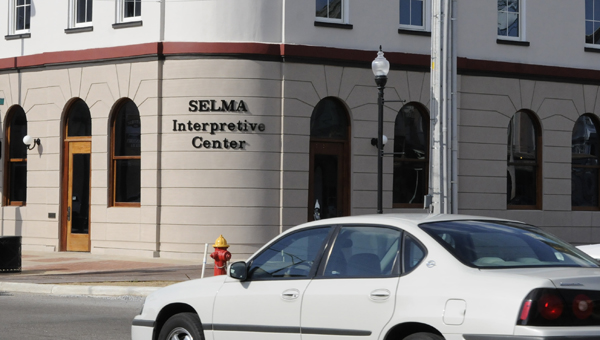 The Selma Interpretive Center has already seen a high volume of visitors in just over a month. Already, more than 800 guests from 21 states have come through the center’s doors. Admission to the center is free. -- Chris Wasson

The City of Selma received some big news recently with the release of the Biden – Harris’ budget for fiscal year 2022, which includes $10 million in funding for construction at the Selma Interpretive Center for a voting rights center that honors the legacy of Civil Rights leaders, including that of the late Representative John Lewis.

Lewis was born near Troy, and served 17 terms in Congress representing Georgia’s 5th congressional district. Lewis was one the most influential Civil Rights leaders in the country, and helped organize and lead the first Selma to Montgomery voting rights march where marchers were tear gassed and beaten by Alabama State Troopers after they crossed the Edmund Pettus Bridge. The incident became known as “Bloody Sunday,” and helped lead to the enactment of the Voting Rights Act of 1965.

According to a recent presentation made to the Selma City Council by Joy Kinard, the superintendent of the Selma to Montgomery National Historic Trail, The National Park Foundation, which is the official philanthropic partner of the National Park Service, would purchase two-thirds of an acre from the city, which includes 2, 4, 6, 8, and 10 Broad Street, along with 1119 Water Avenue.

“When that facility was first conceived, it included a multi-level parking deck, an I-Max theater and was supposed to take up the full block on Broad Street,” said Selma Mayor James Perkins, Jr.

“That did not happen, but with this transfer of ownership to the federal government, they would have the money to do this. It will become what we originally intended it to become, which is an anchor facility to draw tourism across from the Edmund Pettus Bridge, and the connection of those two will really give us the ability to tell our historic story in a constructive, positive way. And with that anchor facility it will be able to connect the other ancillary points such as Brown Chapel, and Tabernacle, R.B. Hudson, Selma University, and those other institutions that played a role in the movement so we can strengthen our tourism piece so when people come into our community they won’t walk across the bridge, come into the Interpretive Center and walk through the first floor, buy a few items and then leave. We’ll actually be able to build a tourism channel they’ll be able to walk through.”

Currently the physical condition of the properties in question is not good, which were noted in a site visit earlier this year by NPF representatives. Some of the problems include “Existing structures proposed for development are not configured to meet NPS needs and are in poor-to-failing condition. One has already collapsed.” Other noted problems include drainage, utilities, asbestos and lead paint.

According to a resolution recently introduced to the Selma City Council, the city would sell the property to the National Park Foundation [NPF], which would then donate the property to the National Park Service [NPS]. NPS would oversee construction of the buildings and grounds, as well as design, fabrication, and installation at the center. The resolution calls for the sale to be contingent on an independent appraisal.

In her presentation, Kinard said the vision of the project was to “Provide a premier visitor experience that includes innovative exhibits, a voting rights education center honoring the legacies of John Lewis and other voting rights activists, multi-use space, interpretive green space and adequate facilities.”

Alabama Congresswoman Terri Sewell, who grew up on Selma and represents Alabama’s 7th Congressional District, said expanding the current Interpretive Center would elevate it to become the premier Voting Rights museum in the country.

“Growing up in the shadow of the Edmund Pettus Bridge, the history of Bloody Sunday and the fight for voting rights was never something I had to learn about in school,” Sewell said. “As vibrant parts of my community, the Foot Soldiers of the movement were instrumental in my life. I would not be who I am today without them. However, the rich history of Selma and the perseverance of the Foot Soldiers is not something that every child is exposed to.

“The history of Selma and the Civil Rights Movement is a seminal event in American history, and I believe the Selma Interpretive Center should become this nation’s premier Voting Rights museum and interpretive center. I am thankful to President Biden, Secretary Haaland, Speaker Pelosi, Chair DeLauro, and the large bipartisan group of Members of Congress for their continuous support. This $10 million investment from the Biden Administration will help ensure that the legacy of the Foot Soldiers and the fight for voting rights is preserved for the benefit of future generations around the globe, while also bringing much needed economic revitalization to my hometown.”

The expanded Interpretive Center would certainly help the city accomplish the need to have visitors stay longer, which would logically mean more revenue being brought into the city to help fund city services.

“The Selma and Dallas County Chamber of Commerce and Tourism Information is committed to getting visitors to see the sights and spend the night and developments like the St. James and Interpretive Center, as well as other local investments, are essential in furthering that mission.”