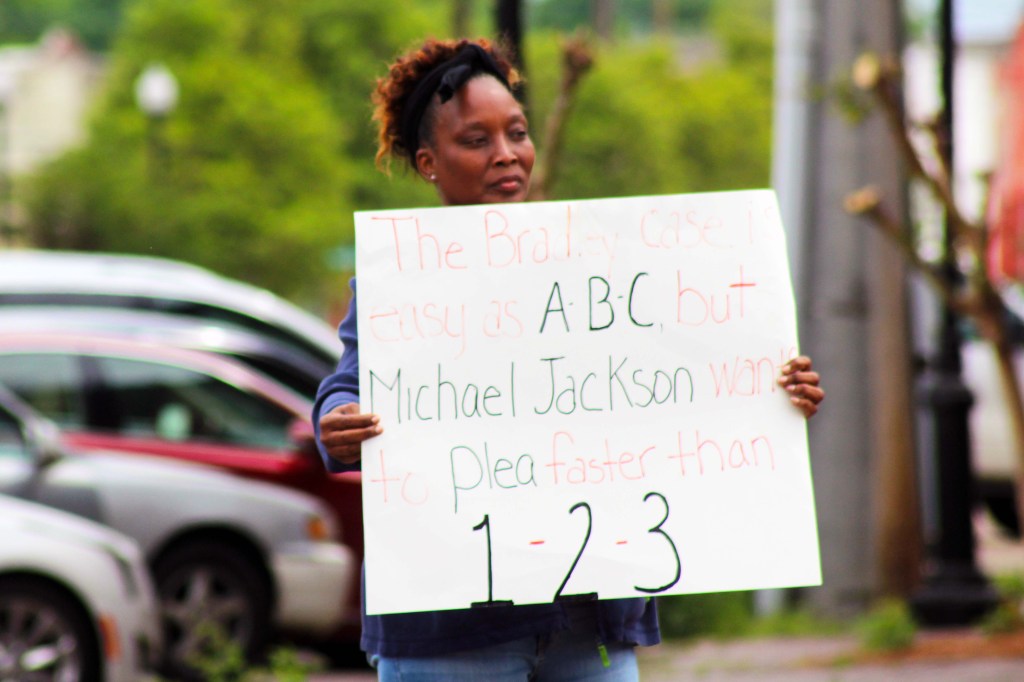 Since Monday, protestors have been gathered outside of the Dallas County Courthouse, migrating Thursday to a post at the foot of the Edmund Pettus Bridge, demanding action from Dallas County District Attorney Michael Jackson regarding a seven-year-old double-murder case that is now ebbing toward a plea deal.

In November 2013, Donyea Williams and Kervina Woods were shot to death in Woods’ home and their families have been staging the demonstration since, last Friday, they were informed that Jackson planned to pursue a plea deal in the case, which would give the murderer two life sentences, rather than a jury trial in pursuit of a life without parole sentence.

“Where we are now, this has been going on for quite some time,” said Regina Woods, mother of Kervina Woods. “We would go to hearing after hearing and it would be continued and there was never an objection to the continuations.”

Regina Woods, as well as other family members from both families, remembered the exact time that Jackson informed them that he would be accepting the plea deal from the defense.

“We pleaded with District Attorney Jackson to have a trial, he said no, his mind was made up,”

Regina Woods said. “Despite the evidence we have against the defendants, he still said no, his mind was made up. That’s a hurt will never forget.”

For Alton Green, a Selma firefighter and Kervina Woods’ step-father, as well as a former investigator who spent more than 12 years in the Dallas County District Attorney’s Office,

Jackson’s move to accept a plea deal is unacceptable.

“He took a capital murder case and downsized it so he wouldn’t have to try it,” Green said. “He has a confession from both parties on the defense side, they have a murder weapon, they have

Williams was the father of Kervina Woods’ youngest child and the only reason he was at the residence on that night in November 2013 was because, earlier in the evening, Bradley had slashed the tires on Kervina Woods’ car and she called Williams for a ride.

Green noted that, while a double-life sentence seems like an achievement for the District Attorney’s Office, it in fact means that, within 30 years, Bradley will be eligible for parole.

“He will get on TV and tell you he got a double-life sentence and the public’s not really aware of what that means,” Green said.

“[McMillan] guaranteed us a trial,” Green said. “He said he was going to make that first priority on his docket.”

Adondra Williams, Donyea Williams’ mother, is the daughter of Ulysses Blackmon, a member of the famed “Courageous 8.”

“My father marched for justice in the 60s and here I am…still marching for justice,” Adondra

Williams said, adding that it’s frustrating that Blackmon’s grandson can’t get justice in the city where his grandfather fought so hard for it.

According to Adondra Williams, Jackson cited the fact that the defense team consisted of a retired judge and a former district attorney.

“That shouldn’t matter,” Adondra Williams said, adding that Jackson never remembered thevictims’ names and could never provide them with information on the case.

“He’s demonstrated that he has no knowledge of this case at all,” Green said.

The family is gearing up for a hearing Wednesday in which Jackson will submit the plea deal to McMillan for approval – if it’s accepted, the deal is done; if not, the victims’ families will have their day in court.

While the family is optimistic that McMillan will reject the plea agreement, Green noted that it’s only a “v ery small chance.

“The judge usually doesn’t want to step on the DA’s toes,” Green said.

Right now, only Bradley is being sentenced, so when Irvin begins the process, the family will have to relive the same terror and inconvenience they have endured for the past seven years all over again.

“We’ve lost money from jobs, we’ve taken time off going back and forth, and there’s no empathy for the family and what we’re going through,” Green said. “I would actually like to see him be more professional on this and look at it from a human point of view. He’s victimizing the family all over again. It’s all putting a burden on us. And to have a guy in a position like that, who doesn’t care about the community…that’s ridiculous. If he can’t see past that, then we need a new DA.”

Adondra Williams noted the strange irony that every time they wind up in court it’s during Kervina Woods’ or Donyea William’s birth month or the anniversary of their murder.

The family said the demonstrations would continue until the family is given its day in court.

“We need justice for all,” Adondra Williams said. “We need him to do his job.”

Green called on the community to flood Jackson’s office with phone calls demanding justice for the victims, a sentiment that may not be too far-fetched as the signs the families held along roadways demanding justice and criticizing Jackson drew car horn blasts and waves from passing motorists throughout the day.

Kervina Woods’ and Donyea Williams’ children will be on hand for a demonstration planned for Saturday.

For his part, Jackson said he could not currently comment on the case.