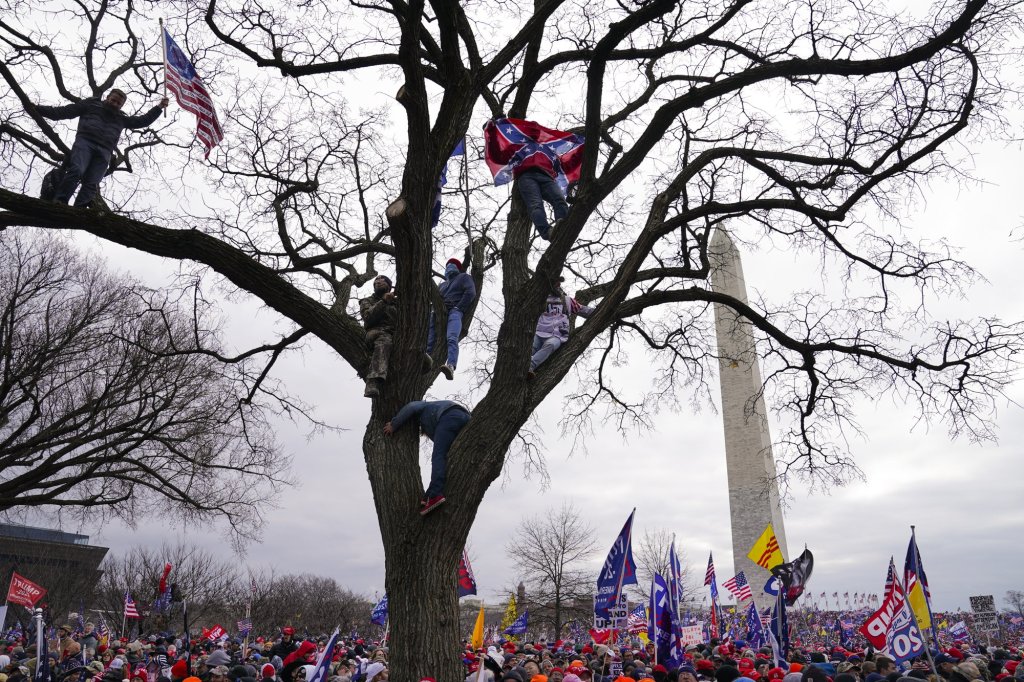 John Minchillo | AP Photo A Confederate battle flag waves as Trump supporters participate in a rally, which eventually descended into unrest, Wednesday in Washington. As Congress prepared to affirm President-elect Joe Biden’s victory, thousands of people gathered to show their support for President Donald Trump and his baseless claims of election fraud, eventually breaking through police lines and breeching the Capitol.

I come to you now for the third time in what has unexpectedly turned out to be one of the most historic weeks in my lifetime.

My first column this week, in which I related my personal health battles over the years in a bid to encourage vaccinations, was written as Georgians went to the polls for a Senate runoff to decide which party would control the upper chamber as U.S. President-elect Joe Biden prepares to take office.

That day was followed by what was meant to be little more than a ceremonial celebration of the affirmation of the people’s vote, but the Electoral College vote certification was derailed, first by Republicans objecting to election results over claims of fraud, for which no evidence has yet appeared, and next by a marauding band of ne’er-do-wells who, in an hours-long siege, entered the U.S. Capitol, ransacked offices, planted pipe bombs, smashed windows and generally caused chaos and disarray.

So, I set to write another column with the intention of not treading ground already trampled by every other person with an opinion on the matter – U.S. President Donald Trump and scores of his cronies have been condemned for inciting the mob and law enforcement has been criticized for its obvious double-standard when it comes to policing dissent, so I tried to focus on the fact that this sad affair is little more than a grisly consequence of living in a post-truth America, where facts are debatable and, therefore, so is reality.

Surely, one would think – and possibly many would hope – that would be enough for the week, but these are strange times and strange events, marked by strange feelings and rumblings, and the more my eyes wander over the photos and parse the various accounts of this disturbing display of lawlessness, which demonstrated a complete disdain for the history and traditions at the heart of our system of governance, the more tiny holes I find through which to view the black rot at the center of this nation’s heart.

In the photo accompanying this piece, a Confederate battle flag can be seen flying from a tree, high above the thousands of protesters below who had gathered to protest the results of an election that, aside from the ravings of those spouting debunked conspiracy theories and outright fabrications, has been declared one of the most secure in American history, as well as the best attended in 120 years.

Later photos, when the crowd had worked its way inside the U.S. Capitol, showed a man milling about inside, meandering down various hallways, with the flag draped over his shoulder.

The presence of the Confederate battle flag during Wednesday’s siege at the Capitol was perhaps the most disturbing sight of the whole charade, as it represents the first time ever that the flag has entered that building and a chilling motive behind these rioters’ actions.

Let us be frank, the actions of the mob at the Capitol are despicable without the presence of a flag known to represent one of the most reprehensible chapters in American history, but the presence of the Confederate battle flag turns the demonstration into an insurrection, a protest into an attack.

The Confederate battle flag was historically flown, like it or not, by a band of detractors committed to overthrowing the American government in the interest of upholding an economic system which relied upon the brutal enslavement of Black people and its bold appearance during Wednesday’s tumult leads one to wonder if, like the men who fought and died for the Confederate States, these rioters have been convinced to betray their nation in the interest of a false patriotism built on hate and fueled by lies.

I am a child of the South and, like many Southern white men, I was raised to have a certain reverence for the Confederacy, but I was also taught that most of the poor men who did the fighting and dying for the Confederacy did so thinking they were defending their freedom and homeland, a false notion they’d been fed by rich men looking to protect their wealth and the way of life that provided for it.

Surely, any student of history should be able to see why the presence of the Confederate battle flag, the symbol of an invading force whose sole aim was to divide this nation, at the first storming of the U.S. Capitol by its own people (the last time it was under siege was by the British in 1814), all of whom had been fooled into believing an election had been taken from them by radical forces committed to ending every sacred tradition held dear, would be a truly ominous sight.

Do I believe that all of the men and women who caused destruction at the Capitol on Wednesday want to see another Civil War? Certainly not, but if some of their comments are to be believed, it’s not beyond the realm of possibility.

Over the past year, many of America’s deepest and most severe wounds have once again been laid open – nearly every one of them was on display during Wednesday’s insurrection and perfectly encapsulated in the site of that flag waving in the halls of the Capitol, a place it should never have been and a place we should all hope it never appears again.

Our opinion: Whether you won or lost, campaign signs need to be removed

Our opinion: Cities of Selma, Orrville, Valley Grande delivered on Fourth of July