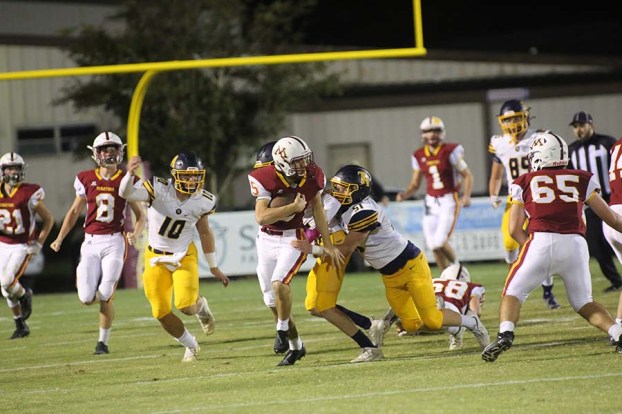 Holt Utsey ran for almost 200 yards and Cink Minter had two interceptions as the Senators prevailed 30-13 on Friday night at Morgan Stadium.

“I’m very thankful to the Lord for these coaches, players and the players’ parents,” Senators coach Danny Raines said.

The Senators-Knights contest was so big that Raines’ daughter, Sara Raines, flew in from Fort Worth to attend.

But it was the Senators’ defense, led by Minter’s two interceptions, stole the show. Minter had a 80 yard interception return called back for a holding penalty.

“It feels great to beat a good team and help clinch a home playoff game,” Minter said. “All I did was follow the ball.”
The Senators took control from the start, leading 6-0 after one quarter on Utsey’s first touchdown.

After the Knights closed within 13-7, the Senators used a trick play.

The Senators padded their lead to 23-7 after three quarters on Wade Mason’s 32-yard field goal.