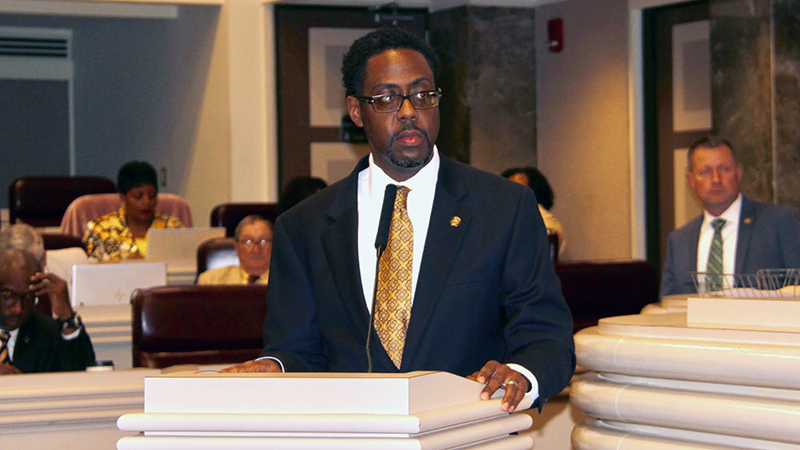 During its virtual convention over the weekend, the Alabama NAACP announced Alabama Rep. Prince Chestnut, D-Selma, as its 2020 Legislator of the Year.

According to Chestnut, the Alabama NAACP sent out an earlier email informing him that he’d been nominated for the award and asked for additional biographical information, which he sent along shortly thereafter.

“Just because you’re nominated doesn’t mean you’re going to get the award,” Chestnut said. “It just means somebody nominated you.”

However, about a week after he sent along the supplemental information, Chestnut learned that he in fact had won the award.

“It was unbeknownst to me,” Chestnut said. “It wasn’t anything that I expected…and I have the highest form of gratitude to the NAACP for this award. There are people throughout the state, apparently, who know my work and it’s just great to be recognized by the nation’s premier civil rights organization.”

During the virtual ceremony, Alabama NAACP President Benard Simelton talked about Chestnut’s work in the Alabama Legislature and noted that many of the NAACP’s biggest priorities were focuses of Chestnut’s legislative efforts.

The award was not Chestnut’s first collaboration with the Alabama NAACP – earlier in the year, Chestnut joined U.S. Rep. Terri Sewell, D-AL, and U.S. Sen. Doug Jones, D-AL, for town hall to discuss the Shelby v. Holder decision, which gutted a portion of the landmark Voting Rights Act, and other voting rights issues.

“Even back then…I just got a call from the state organization and was requested,” Chestnut said. “I was thankful they thought enough of me then to have me included with our federal folks.”

And while Chestnut is celebrating the award, his eyes are still on the task ahead, which includes another push to have his two voting rights bills – one which would allow for “no excuse” absentee voting and another which would provide for automatic voter registration – during the 2021 Alabama Legislative Session.

That push to advance voting rights in the state likely played a part in the state NAACP’s decision to present Chestnut with this year’s award.

“I think every component of social justice is on the menu,” Chestnut said of next year’s session, which kicks off at the beginning of February. “I’m not going to stop bringing my voting rights bills.”

While the bills have stalled in previous sessions, Chestnut is hopeful that the COVID-19 pandemic, which continues to grip the nation, having infected U.S. President Donald Trump over the last week, will push legislators to take up the issue.

“I really think…my voting rights bills might have a little bit of an opportunity right now with all that’s going on to really advance,” Chestnut said. “Obviously, voting rights is one of the biggest points of contention between the two parties. [Democrats] are all about advancing and giving people the right – not just the right, but the unfettered right – to cast their votes.”

While Chestnut also expects the legislature to take up legislation that might better protect the state from future health crises, he noted that passage of his “no excuse” absentee ballot bill could have been a boon for the state in the current climate.

“Had my bills, especially the ‘no excuse’ absentee bill, navigated their way through both houses and been signed into law, we would have been right where we needed to be with this pandemic as far as voting,” Chestnut said. “If you look at the uncertainty out there, people don’t really know if they have a right nor not to vote absentee.”

For Chestnut, it simply comes down to making voting more convenient for voters.