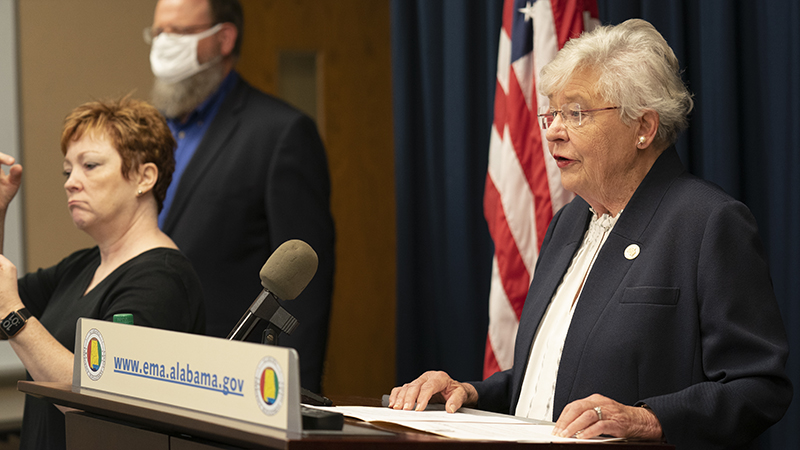 Ivey said the “slow-moving storm” would make landfall in Alabama Tuesday night, but noted the uncertainty of both the storm and its path – Ivey related that, as of Monday, the storm was labeled a tropical storm before being upgraded to a Category 1 hurricane slated to hit New Orleans, before being upgraded twice more and then downgraded Tuesday morning.

“With any tropical storm, the only thing you can predict is that things will change hour by hour,” Ivey said.

The governor said her office has already been in contact with leaders in Mobile and Baldwin counties, which are expected to see the most damage from the storm, and a State of Emergency declaration has already been approved.

Ivey vowed that her office would stand “shoulder to shoulder” with communities across the state in the coming days.

As news of the storm increased, Ivey took action by closing beaches and recommended that residents along the coast in low-lying or flood-prone areas take shelter elsewhere.

Ivey noted that Alabamians are well-acquainted with severe weather, but said Hurricane Sally should “not be taken for granted,” adding that the state is expecting possibly “historic” rainfall, the potential for substantial losses of life and property and major damage along the coast.

“For that reason…I urge you in the strongest way possible to evacuate if conditions permit,” Ivey said.

Ivey added that most Alabama counties will start to see the impact of the storms Wednesday morning, though northern and central portions of the state won’t see as bad of a storm surge, which could include flash flooding, river flooding and possibly tornadoes.

“Sally is shaping up to be a very dangerous and historic flooding event,” Hastings said. “Please take action now to prepare for widespread power outages.”

Hastings also encouraged Alabamians to look for ways to help once the storm has passed.

“The power of Alabama is Alabamians taking care of Alabamians,” Hastings said. “So, social cohesion matters.”

De Block spoke next and noted that the NWS is expecting 80 mile-per-hour (mph) winds along Mobile Bay and said “record flooding” is possible.

According to De Block, 10 to 15 inches of rain are expected near the coast; once the storm heads along Interstate 65 toward Montgomery, 8 to 10 inches of rain will be expected.

De Block said the immense amount of rain will make drainage and issue and put flood-prone and low-lying areas at significant risk.

According to Dallas County Emergency Management Agency (DCEMA) Director Toya Stiles, Hurricane Sally will touchdown in the area Wednesday night and likely hold fast until Thursday morning – with the storm only moving at about two or three miles per hour, the storm is likely to sit on top of communities for an extended period of time, increasing the likelihood of flooding.

“We’re expecting possible river floodng, high winds and possibly a tornado,” Stiles said. “We’re at marginal risk for wind, but it looks like that line is moving toward Montgomery now.”

Stiles said she is continually monitoring weather radars and river gauges on the Alabama and Cahaba rivers.

Additionally, Stiles noted that storm shelters would be opened in a timely manner if the department sees a need for them.

Stiles encouraged residents to keep tabs on the storm as it progresses – the DCEMA will be providing regular updates through its social media accounts for the duration of the storm.