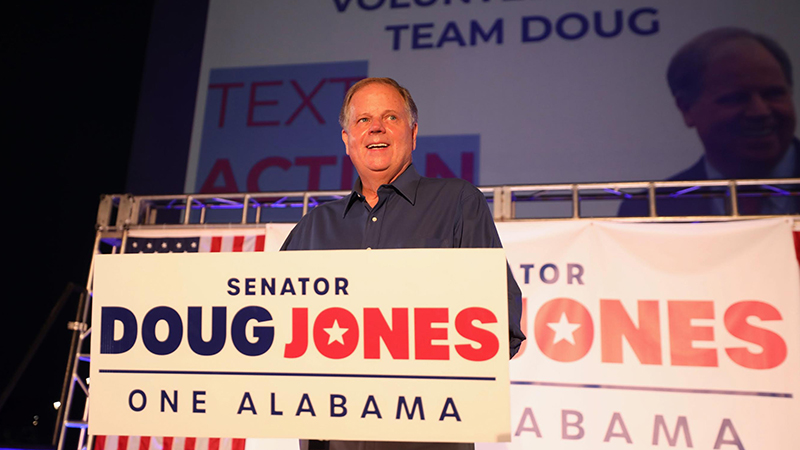 U.S. Sen. Doug Jones, D-AL, kicked off his reelection campaign Monday night at the Grand River Drive-In Theater in Leeds with a socially-distanced rally that drew scores of Alabamians from across the state.

Attendees at the Labor Day event remained in their vehicles, or in lawn chairs posted up just outside of them, and honked their horns and flashed their lights as Jones and a variety of other speakers made the case a second term.

A video aired on the big screen in Leeds showing a bevy of supporters from across the state, each laying out their reasons for backing Jones against political newcomer Tommy Tuberville, whose campaign has been wracked by reports of lawsuits stemming from his hedge fund, in the upcoming election.

Among those who spoke live during the event was Alabama AFL-CIO Vice President Darrell Turner, who vowed labor’s support for the incumbent senator.

“I think it’s timely that we’re here in Labor Day night paying tribute to the contributions and achievements of American workers,” Turner said. “As a labor leader, I try to make people’s lives better, but Doug has taken service to a much higher level.”

Turner noted Jones’ work to strengthen labor laws and bolster training for workers, as well as his Alabama bona fides, as reasons to support him in the upcoming election.

“Doug Jones is homegrown with deep Alabama roots,” Turner said, adding that Jones has spent his entire career in Alabama and educated his children in the state. “Unlike that other guy.”

Turner also celebrated Jones’ work in civil rights, his advocacy on the part of seniors, the fact that he is the only senator with a labor liaison on staff and his twice-award-winning bipartisanship.

“Doug is one of a kind, there’s no doubt about it,” Turner said.

“I can tell you, Doug has our backs,” England said.

England blasted Tuberville during his remarks, saying that he “has no business being on the ballot, much less in the U.S. Senate,” and called on voters to flock to the polls – and encourage others to do the same – in November.

Jones took the stage later in the evening and focused on his motto of “One Alabama.”

“You know, we didn’t talk about ‘One Alabama’ until we kicked off this campaign almost a year ago,” Jones said. “From the very beginning, we were talking about unifying people.”

According to Jones, all of his work in the senate over the course of his nearly two-year tenure has been aimed at that ideal of unity.

“We have so much more in common than we have that divide us,” Jones said. “And we cannot let the other side divide us, folks.”

Jones recalled the celebrations held after his December 2017 special election win over former Alabama Supreme Court Chief Justice Roy Moore, saying it wasn’t just the win that made the moment special but the message that was sent out.