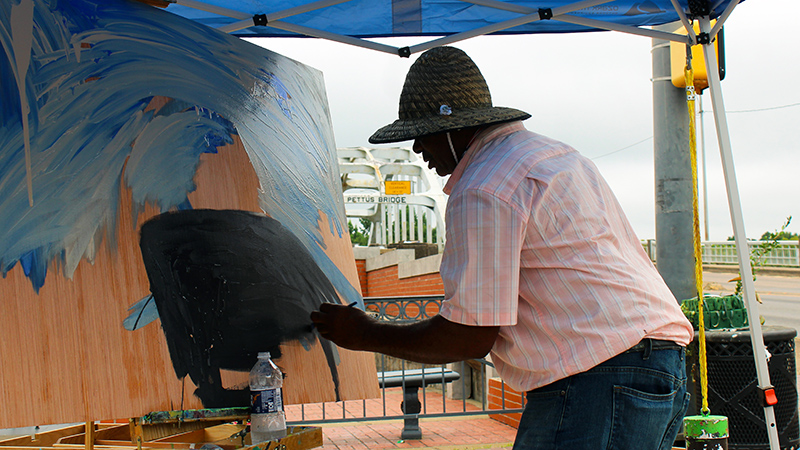 First thing Wednesday morning, beneath a dull, gray sky, artist Ernest Lee, beneath a blue canopy, set out a variety of paintings he splattered atop wooden panels and set to work on a new piece, which would display the Edmund Pettus Bridge.

“I just thought about making something good out of a sad situation,” Lee said of his decision to visit Selma.

Lee left his home in Columbia, South Carolina Tuesday morning and drove straight to the Queen City, inspired to do so after seeing and reading about the events to honor the late Congressman John Lewis.

“Anybody that tries to do good things and change the course of history…I just thought I had to come to the bridge,” Lee said.

Lee said he began dabbling in art at the age of five, starting with doodles and moving into painting by the time he reached 12 years old.

Since then, Lee has spent a lot of time honing his craft and selling his work out of art shops around his hometown, as well as area arts festivals, which have fizzled during the COVID-19 pandemic.

“I haven’t done much lately,” Lee said. “But I’ve been doing a lot of painting.”

Lee’s setup included a small, silver trailer the words “The Chicken Man” painted in black across its side; from it, he pulled a variety of paintings he’d done on slabs of board – some long, thin and tall, others wide rectangles – which ranged from landscapes to historic scenes to famous personalities.

After spending the morning in Selma, Lee said he would be headed down the highway to Marietta, Georgia to paint a picture of an oversized chicken statue.

Coming to Selma is new for the artist, who mostly stays near his home, but he said the legacy of Lewis and other icons of the Civil Rights Movement was on his mind when he decided to make the trek.

“I just had to get to the bridge,” Lee said. “I just wanted to do something a little different.”

For the man who says he paints because he enjoys “making people happy,” Selma was a welcoming town.

“I think Selma’s a cool little town,” Lee said. “The people have been real nice here. Everybody’s so nice.”