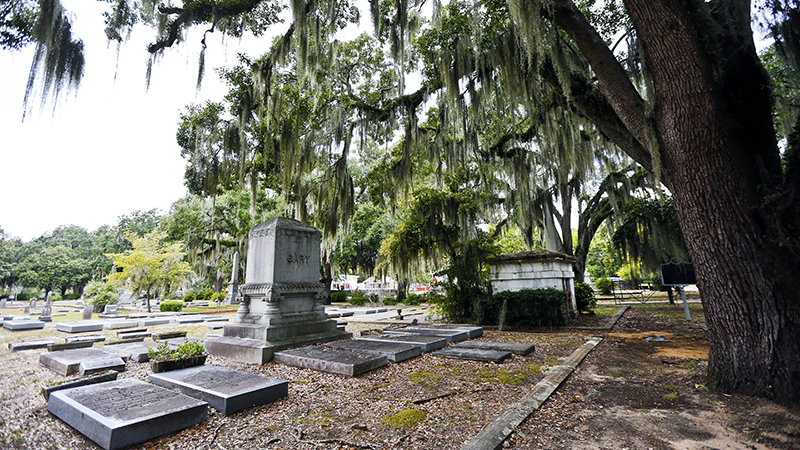 The Haunted History Tours are back for the eighth year, and the Live Oak Cemetery is one of the several places guests can expect to see on the moonlit tour. (Alaina Denean | Times-Journal)

The City of Selma Cemetery Department has put a halt on all weekend funeral services at city cemeteries, according to a memo distributed to all funeral home operators in the area Monday.

“Due to the limited manpower in the Cemetery Department, Saturday and Sunday funerals cannot be accommodated until further notice,” stated the memo signed by Cemetery Department Superintendent John Coon Jr. “I regret the inconvenience this may cause. Thank you for your understanding.”

Coon, however, was unable to shed any further light on the abrupt shutdown of weekend services.

“I’m not at liberty to make a comment for the newspaper,” Coon said. “That’s the city’s policy, that department heads shouldn’t speak to the press without the city’s approval.”

For Selma City Council President Corey Bowie, the decision was a surprise and meant that the majority of Tuesday morning was spent on the phone with local funeral home operators.

“A lot of people are very upset,” Bowie said.

Bowie said that a meeting of the council’s Public Works and General Services Committee slated for Wednesday at 1 p.m. will take up the issue.

“I’m working on a peaceful resolution for the families, as well as the funeral homes,” Bowie said.

According to Bowie, early indications are that Selma City Councilman John Leashore will recommend that the council request that Selma Mayor Darrio Melton allow for three additional employees to be hired in the department, though Melton has thus far failed to move on any of the council’s votes to bring back laid-off workers.

In fact, according to Selma Funeral Home Funeral Director Shane Ogle, Melton is part of the problem.

Ogle said that the city’s Cemetery Department had three employees before Melton moved one of them over to the Public Works Department on Monday, leaving only two employees to tend the city’s three cemeteries.

“That makes a lot of people mad,” Ogle said. “It’s simply the fact that the city doesn’t have its finances in order.”

Further, according to Ogle, the employees still with the department are willing to work weekend hours, but the mayor refuses to allow overtime pay for such work.

“These guys want to work, but the city’s not allowing them to pay overtime,” Ogle said. “It’s kind of a lose-lose situation.”

While Ogle noted that his business would likely take a hit due to the new policy, he noted that funeral homes such as Lewis Brothers and Miller, will likely suffer more.

“Most African-Americans use weekends for services because they used to bury on those days,” said Randall Miller, President of Randall Miller Funeral Service. “But we’ll survive.”

Both Miller and Ogle noted that they will try to work around the new limitations, but many people who have moved away from Selma return to have their loved ones buried here – with weekends off the table, that will be a much more difficult prospect.

“That will inconvenience a lot of people that are traveling, but some things you just can’t help,” Miller said. “It should be worked out where we can do it, but they can’t because they don’t have the employees to work. That should be taken care of.”

“It’s going to cause a terrible imposition for our families,” Larkin said. “The impact it will have on the families we serve will be great.”

Larkin spoke with Bowie and will be among the local funeral home operators on the line for Wednesday’s meeting.

“I’m sure all funeral home directors say the same thing, but we’re committed to serving our families,” Larkin said. “We just couldn’t allow this without at least letting them hear our concerns. Sometimes, this is part of that service, speaking up on behalf of the families we serve.”

Like Ogle and Miller, Larkin saw the biggest impact of the funeral shutdown being faced by those traveling to the Queen City to bury their loved ones.

“People are working, they’re traveling, and it takes time to get here,” Larkin said. “If you have someone that passes away unexpectedly and you have to take off work, Saturday becomes the default day.”

All three showed little concern that their businesses would suffer, each noting that they would find ways to get people into other cemeteries or help them schedule their services during the middle of the week, but worried about the inconvenience it will pose to families facing an already difficult situation.

“I don’t really know what effect it will have on business, but it’s going to be terrible for our families,” Larkin said.