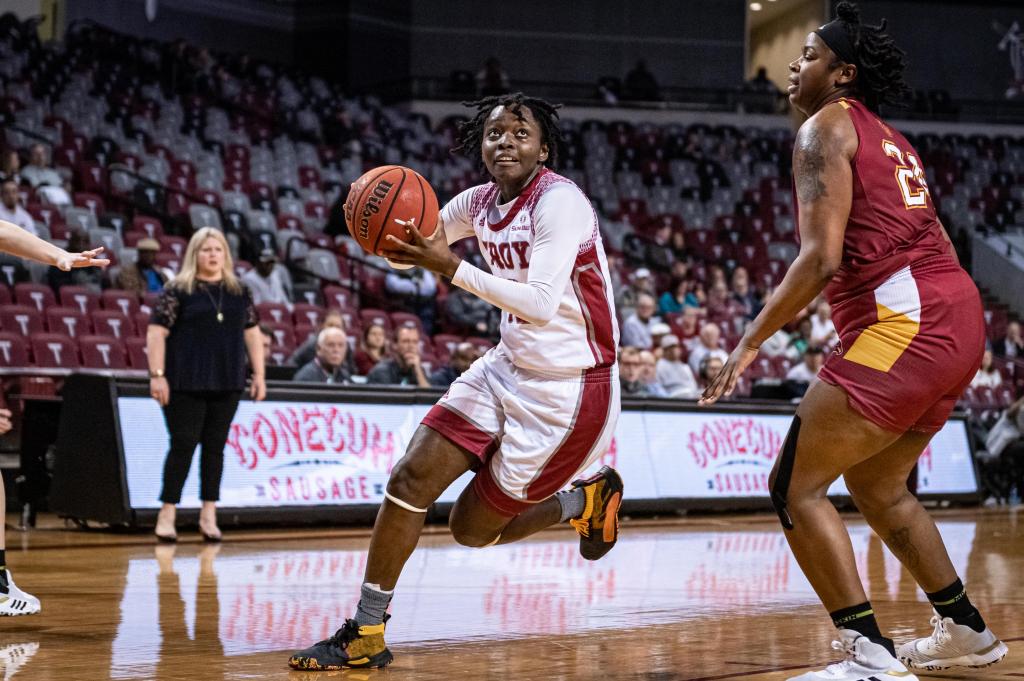 Winchester’s love for the game of basketball began in the rural area of Safford, competing often against her first cousin, John Pettway. They lived 20 feet away from each other, played one-on-one in the backyard and trash talked each other.

She translated those skills into legendary status at Keith High School and just wrapped up her career with a degree at Troy University.

For Winchester, Safford is the launching pad for her hoops dream. Competing against Pettway allowed her to blossom into a solid player.

“John made me tough, we played everyday and it was never easy against him,” Winchester said. “He didn’t let me have my way, but he did toughen me up. John made me learn new fundamentals because some way I was going to have to beat him and it wasn’t going to be easy.”

Pettway, now plays at South Alabama, said he was impressed at how Winchester always held her on against him and other men.

“Harriet was able to play with anybody,” Pettway said. “When we were growing up, we were playing older men and she held her own.”

“When Harriet came to P.E. class in the seventh grade, she stood out,” Williams said. “She made the team and I felt that I had something special. She had a great attitude and was willing to learn. She never had a negative attitude.”

The 5-foot-11 Winchester admits she had doubts when she first joined the varsity squad.

“I was very nervous at first because I was so young,” Winchester said.

Winchester eventually became a legendary forward for the Lady Bears before graduating in 2016. She led Keith to a Class 1A state championship in 2015 and was the 1A player of the year as a senior. She’s also a two-time Selma Times-Journal girls’ basketball player of the year. She’s the school career scoring leader.

“Harriet’s a leader and very unselfish,” Williams said. “She always brought the best out of her teammates and was always positive. She always wanted to get her teammates involved.”

Winchester said playing at Keith and Williams paved the road for her future success.

“Keith High got me to where I am now,” Winchester said. “Keith High taught me the ins and outs of basketball. I wouldn’t be where I am without playing and attending Keith High. It taught how to be a better basketball player and better person.”

Winchester was heavily recruited by Division I schools and had several scholarship offers.  With a 3.0 GPA and 19 ACT score, she qualified academically to play as a college freshman.

“One of our men coaches went to Keith High to recruit a player (John Pettway),” Rigby said. “When the coach got there, he saw this girl playing well against a bunch of boys. He came back to Troy and told me about her.”

Rigby said she thought the Lady Trojans was the last school Winchester would end up.

“We thought she wasn’t interested in us,” Rigby said. “She was just shy and didn’t text much.”

Winchester was interested in Troy and loved their campus when she visited.

“When I went on my official visit, they made it feel like a home away from home,” Winchester said. “The people were genuine and they gave me the ins and outs about how things would be if I did come. They understood that I wouldn’t be too far away from my family in Safford,  Keith High and Orrville.”

Adjusting from high school star to little played freshman was a tough transition for Winchester, who averaged three points and nine minutes.

As a sophomore, Winchester was the Lady Trojans’ best three-point shooter, hitting 52 treys for 36.1 percent.  She started 30 games as a junior and averaged eight points and four rebounds.

Rigby needed Winchester to change her style as a senior, go from scorer to defender.

“Scoring came easy for Harriet, she needed to become our best defender,” Rigby said. “She took the role and was very unselfish about it.”

The move played a big role as the Lady Trojans won the Sun Belt Conference championship. She averaged five points, but had a career-best six rebounds. She started 26 games.

“Playing defense changed my mindset because it wasn’t what I wanted,” Rigby said. “It was needed for the team to win.”

“It was really a treat to get Harriet all four years,” Rigby said. “It taught me the value of having someone all four years. You see a bond develop over those four years.”

Winchester graduated in the spring with a Social Science/Education degree and earned All Sun Belt Academic honors. She finished with a 3.0 GPA.

“Troy taught me a lot,” Winchester said. “At first, I was very nervous about entering the real world. Now I’m prepared for it.”

The next step for Winchester is landing a teaching job with plans to become a coach someday. Winchester said she’s applied for jobs in the area and also plans to enter graduate school, pursuing a Master’s Degree in education.

“I have a passion for teaching and coaching basketball,” Winchester said. “I want to be versatile.”

Pettway believes his cousin will eventually reach her goal.

“Harriet will land a great coaching position,” Pettway said. “She stayed the course and got through some rough patches. I’m very proud of her.”

Winchester plans on teaching her basketball talents to the next generation in the near future.

Kynadra Lewis uses basketball to get her point across