City of Orrville to honor NFL-bound Simmons with parade 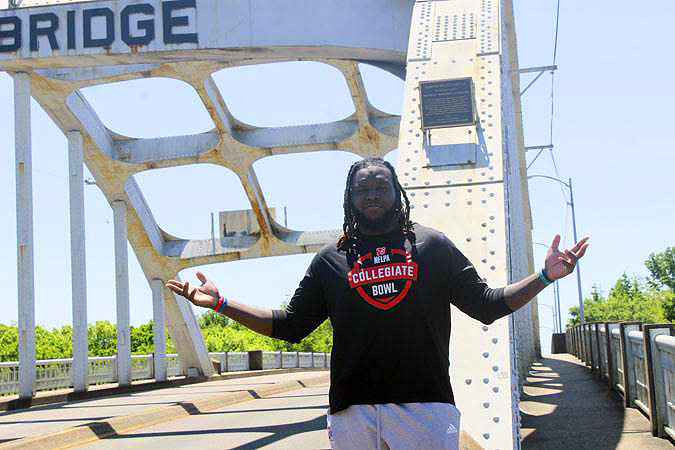 The city of Orrville will honor Simmons with a parade at 4 p.m., starting at the Orrville Community Center.  Participants should arrive by 3 p.m.

Simmons, who played at Tennessee State, was selected by the Chicago Bears in the seventh round of the NFL Draft. Simmons was the 227th player selected overall.

Simmons said the childhood in Orrville paved the way for a potential future with millions.

“I’m a guy who can compete on the first day in because I was born on a farm,” Simmons said. “I’m a blue-collar guy who grew up on a farm, throwing hay bales, disciplined. I feel like my hard work, it can match anybody’s.”

Orrville Mayor Louvenia Lumpkin said the city wanted to honor Simmons before he began preparing for his rookie season.

“Orrville is very excited to have a professional football player in the community,” Lumpkin said. “Success don’t come by the size of a community , success comes with hard work. Mr. Simmons is the face of so many young men coming from a small town wondering if they can make it in the NFL.”

“We worked hard to develop Lachavious because of his size,” Miles said. “He had that body, footwork and work ethic. He has great character and comes from a great family background. It was a pleasure to coach him.”

Simmons, the son of Quincella Simmons, thanked TSU for putting himself in position to have an NFL career. Simmons played in 41 games during five years with the Tigers.

“My time at TSU was amazing,” Simmons said. “The friendships I built and the relationship with the coaching staff was amazing. I would like to give a special thanks to Russ Ehrenfeld. If it wasn’t for him, I would not be the player I am.”