Made with Love: Peggy Williamson sells her signature cookies to Selma 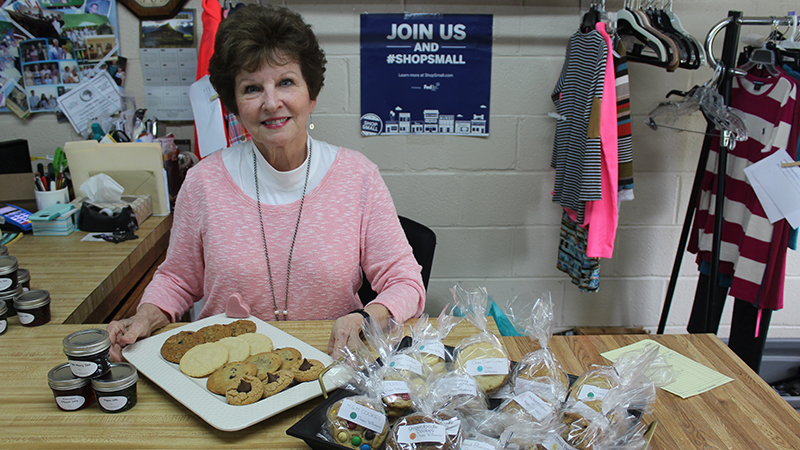 Peggy Williamson has operated her consignment store, The Clothes Line, since 1982.

Williamson has been selling clothes to women and children out of her store for over 37 years, but roughly two years ago Williamson started selling something else to increase foot traffic at her shop- cookies.

What started as a way to get more customers into The Clothes Line became its own separate endeavor.

“The cookies have taken on a life of their own,” said Williamson.

Cookies have always been a point of pride for Williamson. She has always taken a batch of the handheld treats to friends and family members for weddings, funerals, births and all sorts of occasions.

When she began brainstorming ways to increase customers at her store, Williamson knew she wanted to sell her cookies but she wasn’t sure quite how.

Soon thereafter, Williamson’s husband, Cecil, told her about the Alabama Cottage Food Law that would allow here to sell her signature cookies and soon, Williamson’s second endeavor was underway.

Williamson’s cookies will be familiar to any Selmian whose eyes have wandered around at the register at either Mark’s Mart or Mr. Roy’s.

Many a customer has likely walked out of Marks Mart or Mr. Roy’s with cookies they didn’t think they’d be buying based solely upon their perfect presentation and proximity to the register.

“The cookie is the perfect snack,” said Williamson. “You don’t have to have a plate and fork, you don’t have to sit down and you can just eat it on the go. They’re great.”

Williamson can also be seen selling her cookies at the annual Farmapalooza at the Orrville Farmer’s Market and Sturdivant Hall Artisan’s Fair, she also does special orders to satisfy the cookie cravings of entire gatherings.

Williamson says there’s a cookie for everyone amongst the assortment of cookies in her recipe arsenal including: chocolate chip, oatmeal, M&M, sugar, snickerdoodle, lemon, sugar and peanut blossoms, a peanut butter cookie with a Hershey’s kiss placed perfectly in the middle.

In addition to the classic lineup of cookies, Williamson also offers a couple of seasonal favorites like the gingerdoodle, a gingerbread snickerdoodle hybrid, and the rosemary shortbread which debuted this holiday season.

Williamson uses the best ingredients she can in each batch of her cookies, opting for real butter, not margarine, and the freshest of everything.

While cookies have become her signature product around Selma, Williamson also offers an assortment of jellies and jams.

Just like with her cookies, Williamson doesn’t cut any corners when producing her triple-berry jam (which consists of fresh strawberries, blueberries and blackberries), muscadine jelly and both red and green pepper jellies.

Of all the products Williamson offers, she says each one becomes a favorite for someone.

“There isn’t any one cookie I think I could do away with,” said Williamson. “Everybody has their favorite.”’

“People had always told me they love my cookies,” she said. “I’ve always given my cookies to friends and family in times of sadness, sickness or happiness.”

Williamson developed a love of baking when she was a teenager.

Williamson said one of her first forays into the world of baking involved a carrot cake and eating entirely too much of the icing before the cake was even finished.

“The cake turned out great,” she said. “But by the time it was finished, I had licked the spoon so much I was nearly sick.”

Unlike with the carrot cake, Williamson said she never gets sick of the cookies.

“They’re such happy little things,” she said. “They just fill the house with a wonderful smell.”

Once, Williamson’s granddaughter asked her why her cookies were so good and she answered, “because they’re made with love”.

“It pleases me so when people come in and say that the cookie reminds them of a cookie their grandmother or mother made,” she said. “I just love to take people back to that place. Peoples sense of taste just brings back a flood of memories, it’s like music.”

Cookies by Peggy Williams can be found at Mr. Roy’s, Marks Mart and at The Clothes Line.