Comradery amongst artists, Selma Art Guild inspires one another while promoting the arts 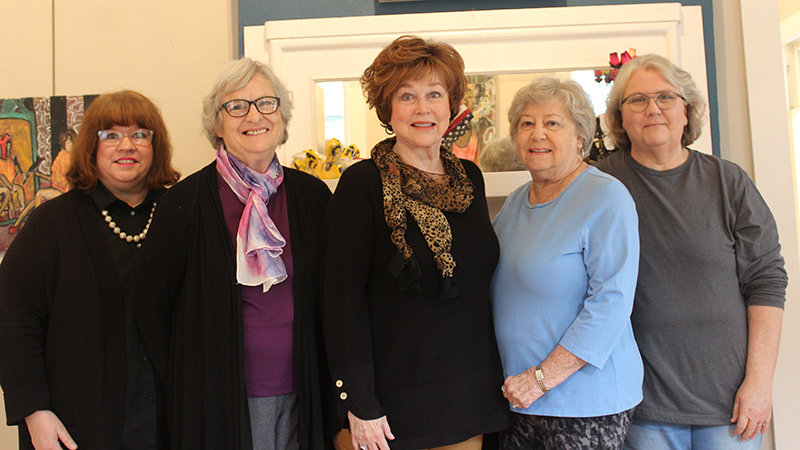 The Selma Art Guild has been a part of the Queen City’s art scene for 50 years.

Cam Guarino, who’s been with the Guild since 1981, nearly 40 years, said the Selma Art Guild was founded in 1970 by Charles and Lorena Garth, along with several other supporters of the arts, to create more artistic opportunities and to make the community aware of the artists who were here.

Today, the mission of the Selma Art Guild is a little more involved.

The non-profit organization still highlights local artists and their works but also provides art education through classes throughout the year as they work to encourage economic development through the arts.

The group’s members consist of local artists and patrons, all brought together by their love of the arts.

Guarino, who works as an art teacher at Morgan Academy when she isn’t busy with the Guild, works in oil paintings.

“They’re sort of universal,” she said of her preferred medium. “One time, someone said a painting I’d done of Wilcox County looked like the south of France. I said, ‘It can be wherever you want it to be.’”

Jo Taylor, a potter and fused glass artist, is no less enthusiastic about her medium.

Taylor began her art education in water colors with the goal in mind of creating botanical illustrations but after a ceramic handbuilding class AUM, she made the switch.

“I was hooked,” she said. “I love the medium of clay because you can manipulate and mold it.

You can use it for utilitarian purposes or sculptures or paintings. It can be anything you want it to be. It’s malleable. Glass is the same.”

Joanna Nichols joined, has been a member of the Selma Art Guild since 2001, nearly 20 years.

Nichols was drawn to the Guild after she’s just moved here as a way to make friends.

Nichols said she’s “done enough” art, but she worked in water colors when she arrived in Selma.

“Watercolors were best for me,” she said in her English accent. “They seem almost alive. I know it sounds strange but water does really fascinating things when it runs with the paint. I did a lot of painting when I first arrived [to Selma]. I love things that are different. I loved the old buildings that were sort wearing down and the extraordinary old cars that were sitting around.”

Sandy Greene, a retired art teacher, is equally fascinated by the Selma landscape, but has chosen photography over watercolors to capture it.

‘I love to take photos from all different angles,” she said. “I don’t want to look at something straight on, I want to find the right angle to make it look interesting.”

Pam Stewart grew up in Selma, but left as a teenager.

She returned six years ago, and has been a member of the Guild for the last three.

Stewart comes from a family of Selma Artists, her grandfather’s ornate woodwork can still be seen at the First Baptist Church.

Unlike her grandfather, Stewart works in portraits, prophetic paintings and water colors.

Stewart joined the Selma Art Guild as a way to become involved with the community and connect with other artists.

“Fellowship with other artists is important. A lot of artists tend to be loners,” said Stewart. “When you’re alone, staring at a blank canvas, it can be terrifying. But when you get with other artists, you get inspired and learn from one another.”

Taylor said the comradery amongst the Selma Art Guild’s members was important.

“We get together and learn from one another’s point of view,” she said. “This group of people are just so wonderful. We may disagree sometimes, but we all have the same mindset. And the same heartset. We’re all very giving and forgiving people.”