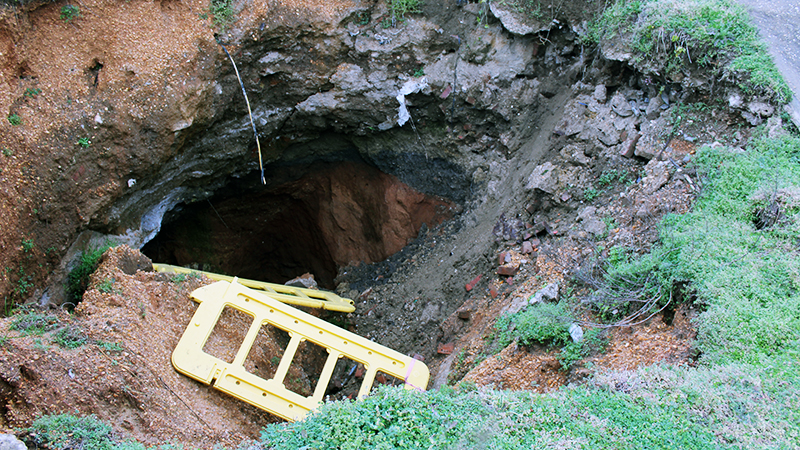 Taking the concrete steps down to the Riverwalk Park, one can gaze over the left-hand rail and see a gaping hole several feet deep with protruding wires and busted bricks that has only grown wider and deeper as heavy rain has pelted the area over the past several weeks – on Tuesday night, the Selma City Council voted unanimously to move ahead with a multi-phase plan to fill the hole and repair the staircase and light damaged by it.

According to Selma City Engineer Ray Hogg, the growing hole first popped up around eight months ago.

Hogg flew a drone into the hole in early January to take photos of areas that could not be seen from above.

“It’s really interesting,” Hogg said. “I’ve been doing engineering work in Selma for 40 years and I’ve never seen anything like this.”

Inside the hole, cutting back toward Water Avenue, is a circular brick drainage tunnel unlike others in the city, which generally had flat walls and bases but rounded tops.

At some point, the brick began to fail.

“That failure could have happened years ago but, because it was so deep, no one knew the problem was there,” Hogg said.

While his drone flight earlier this month showed a “much bigger” hole than Hogg explored six months prior, his most recent found no substantial change.

Still, Hogg noted that the hole will inevitably expand if nothing is done soon.

“If you continue to have rainfall, it will get bigger,” Hogg said. “It’s not getting any smaller – we know that’s not going to happen.”

During Tuesday’s meeting, Hogg estimate that the cost of filling the hole, replacing the staircase and two lights and installing fencing around the area would cost roughly $110,200.

“It could be less or it could be more, but I based it off of my best instinct in previous engineering work,” Hogg said.

The first phase, which will cost around $15,000, requires Hogg to develop plans for the work.

According to Selma City Treasurer Ronita Wade, that money will come from the City of Selma Planning and Development Department’s special projects account.

Wade said she plans to present the council with two options for covering the rest of the work at the next work session – the funds will likely be pulled from “other line items being under-utilized in the current budget.”

While there had been hope that the work could be done before the annual Bridge Crossing Jubilee, Hogg said that’s unlikely.

“I just really don’t see any way that’s possible,” Hogg said. “I don’t know that we’ll be turning dirt with shovels by then. There’s a lot of steps in the process on a project like this.”

After Hogg finishes the design, the construction work has to be advertised and bidded out before work can begin.

Overall, however, Hogg was happy to see the council take action on what he called “a serious problem.”

“Every council person that was there was willing to do a little bit to make sure this problem is corrected,” Hogg said. “There was unanimous consent on realizing that there is a problem and we’ve got to fix it.”