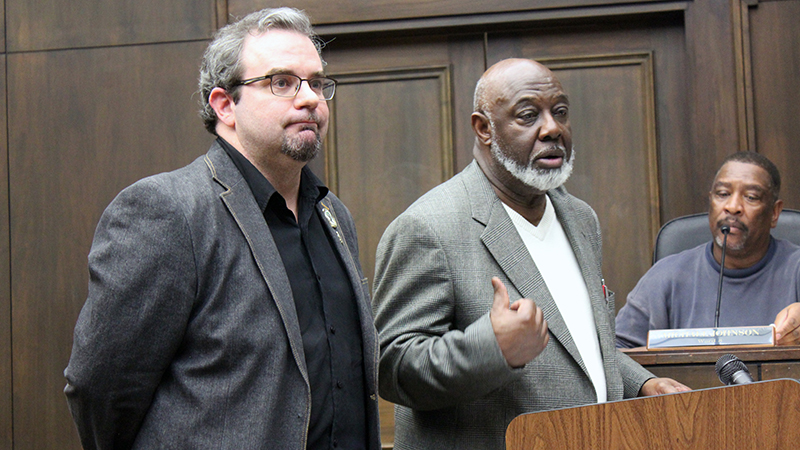 During its first work session of 2020 Monday, the Selma City Council heard from Rev. Lawrence Wolford and Daron Harris, Program Directors for Truth, Racial Healing and Transformation (TRHT) Selma, who were rallying support for a resolution to codify Selma’s involvement in racial healing efforts.

Harris said signing the resolution gives Selma the opportunity to join 13 places across the nation that have already signed similar documents.

The organization, which is working alongside the Black Belt Community Foundation (BBCF) and the Selma Center for Nonviolence, Truth and Reconciliation (SCNTR), is planning events in conjunction with Martin Luther King Jr. Day, including the premier of a documentary film.

Film crews have followed the TRHT Selma crew around during the course of their work and the footage will be included in a film that will be seen across the nation.

Faya Rose Toure also addressed the council, calling for the city to install signage at the foot of the Edmund Pettus Bridge to inform travelers that the bridge’s namesake is not worthy of being honored – Pettus was an officer in the Confederate Army and a Grand Dragon of the Ku Klux Klan (KKK).

“There can be no reconciliation without truth,” Toure said. “As long as we pretend this is not the history of Alabama, we cannot heal.”

According to Selma City Councilwoman Angela Benjamin, an unofficial poll online showed people wary of renaming the historic bridge, but Toure noted that Alabama Sen. Malika Sanders-Fortier, D-Selma, collected more than 300,000 signatures across the country from people in support of renaming the bridge.

Toure called Pettus a “domestic terrorist” and stated that the cost of signage to indicate as much would cost less than $2,000 to install.

Also on hand for Monday’s meeting was Selma YMCA board member Juanda Maxwell, who was once again calling on the council to reinstate the lodging fees previously reserved for the facility.

According to Maxwell, the funding amounted to roughly $5,000 per month.

Joining Maxwell was Selma YMCA Interim CEO Glen Haley, who was brought on to investigate the viability of the local recreation facility and assist in formulating a plan for making it solvent.

“This is a turnaround situation,” Haley said. “If the debt was addressed…this YMCA has a viable future.”

Haley said that the local YMCA has already reduced its debt by $156,000 and has instituted a plan to tackle the remainder in the next three years.

Additionally, Haley noted that leaders at the YMCA are working to establish new programs and address some of the repair needs on the building.