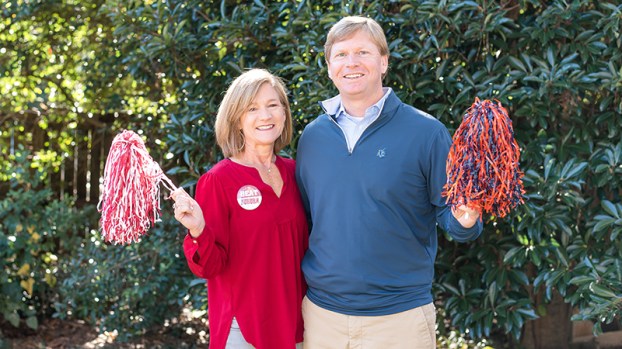 Thanksgiving week is usually an interesting time in the home of Andy and Rebecca Stewart.

The annual Iron Bowl contest between Alabama and Auburn concludes Thanksgiving weekend. The Tigers (8-3) host fifth-ranked Alabama (10-1) on Saturday at 2:30 p.m. at Jordan-Hare Stadium in Auburn. CBS will televise the heated in-state rivalry.

In the Stewart household, Rebecca Stewart is the only University of Alabama graduate, while her husband, Andy Stewart, graduated from Auburn University. Their daughters, Louise and Jane Anne, both attend Auburn.

“It’s just all for fun when me, my friends and family pick on each other about this game,” Andy Stewart said.

Andy Stewart, President of Trustmark National Bank, will be attending his 40th consecutive Iron Bowl on Saturday – his first Iron Bowl was a 25-18 Alabama victory, which the Crimson Tide rode all the way to a national championship under famed University of Alabama Coach Paul “Bear” Bryant.

Rebecca Stewart, a Dietician at the Dallas County Health Department, said she understands the implications of the annual gridiron bout. Rebecca Stewart said she and her twin sister originally attended Crimson Tide games with their late grandfather.

“Not exactly sure how many total Iron Bowls for me, but I only missed one in the last 25 years,” Rebecca Stewart said. “I missed that game because it was sleeting. I don’t do bad weather.”

The Stewarts have attended every Iron Bowl contest together since 1992, the year they got married. Rebecca Stewart, 50, said friends introduced them in Selma, Andy Stewart’s hometown. The Bay Minette native was visiting a cousin in Selma.  Andy Stewart said they met on the Alabama River.

Andy Stewart, 50, said no wagers nor any animosity in the Auburn-Alabama rivalry have ever materialized between him and his wife after the game was over.

Rebecca Stewart said she’s proud to have her children attend Auburn. Jane Anne Stewart, 21, is a senior majoring in Public Relations. Louise, 19, is a sophomore majoring in Exercise Science.

“It’s a little scarier for us since Tua can’t play, but I’m still hoping for Mac Jones to pull out the win for Alabama,” Rebecca Stewart said.

“The games have been different the last few years because it has national implications and decides who makes the four-team playoff,” Andy Stewart said. “It used to be about bragging rights and wanting to beat your in-state rival.”