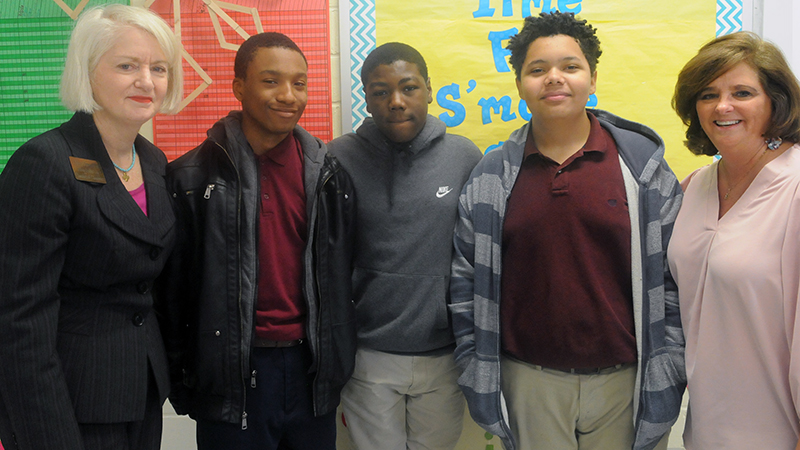 After classmates took home the top prize for the 2018 Congressional App Challenge for students in Alabama’s 7th Congressional District, represented by U.S. Rep. Terri Sewell, D-AL, R.B. Hudson Steam Academy students Austin Reeves, Ashton Young and Thomas Ross are looking to win this year’s  top prize with their app “Selma Tours,” which provides a list of historic sites for tourists to peruse when they visit town.

“This was their first attempt at doing the app challenge,” said R.B. Hudson STEAM Academy teacher Demisha Stough, who worked alongside the students in building the app. “I just think they did a super job and I’m really proud of them.”

Selma-Dallas County Chamber of Commerce Executive Director Sheryl Smedley said her office assisted the students by providing them accesses to resources needed to get the app off the ground.

Additionally, a grant from Auburn University allowed the students to work with Kia Perkins of the Southeastern Center of Robotics Education, who helped the students decide on a project and worked with them throughout its inception.

“There’s so many tourists that come to Selma,” Stough said. “If we could create an app with all of those historic places on it, we just thought that was a great idea.”

Already the students are planning to expand the app and Smedley is anxious to see it go live so that visitors to the Queen City can begin utilizing the app.

Some of the sites currently featured are the Edmund Pettus Bridge, Brown Chapel AME Church, the National Voting Rights Museum and more.

All together, R.B. Hudson students have create 10 different apps that will be submitted to this year’s app challenge, which Stough said will feature stiffer competition than last year’s competition.