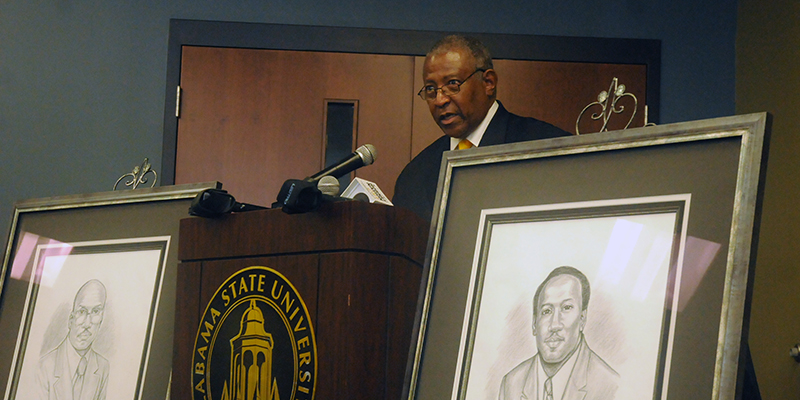 The link between Selma and Montgomery, already mighty in the eyes of history, became a little

stronger Wednesday as Alabama State University (ASU) and the Courageous Free Thinkers Committee of the Selma-Dallas County Friends of the Selma to Montgomery National Historic Trail Association signed a memorandum of understanding to solidify their partnership in telling the stories of the Civil Rights Movement.

At the center of Wednesday’s press conference were a set of pencil-drawn portraits of the Courageous Eight, drawn by Montgomery artist Phyllis Parks, which will be displayed in ASU’s Levi Watkins Learning Center until they are carted across the country to share the story of the Civil Rights Movement in locales across the nation.

ASU President Quinton Ross, Jr. opened the signing ceremony by welcoming those in attendance and celebrating the opportunity to “ensure that history is told” in cities “across this great nation.”

Following Ross was Rev. James Perkins, Chairman of the Courageous Free Thinkers Committee and one of the champions behind the collaborative project, who noted that the work to bring the partnership to life began early in the year.

Perkins brought up Selma-Dallas County Friends of the Selma to Montgomery National Historic Trail Association President Charles Johnson, who noted that it was fitting that he should be a part of the “historic moment” after having attended ASU as a student.

Johnson said that the initiative was part of the group’s effort to assist with the dreams passed down by earlier generations.

“We now have an opportunity to share this story nationally,” Perkins said after Johnson’s statements. “Perhaps even internationally. This is an exciting effort.”

On display during the press conference were the original portraits drawn by Parks – the only copies that exist are those that were given to the families of the Courageous Eight prior to Wednesday’s unveiling, which comes on the eve of the opening of an interpretive center on ASU’s campus, forever enshrining it as part of the historic Selma to Montgomery march.

“We must tell this story,” Perkins said. “We must keep this history alive.”

ASU Archivist Dr. Howard Robinson discussed the history of the Courageous Eight, saying that the group spawned out of the Dallas County Voters League, which came under pressure from the federal government due to its practice of peaceful agitation – a 1964 injunction forbade protest, but the Courageous Eight defied the “clampdown” and met clandestinely to forward the fight for voting rights in Dallas County.

At the end of the ceremony, Ross and Perkins, as well as other dignitaries, officially signed the

memorandum of understanding, which marks the beginning of a partnership that will preserve and promote the history of the civil rights movement across the country.