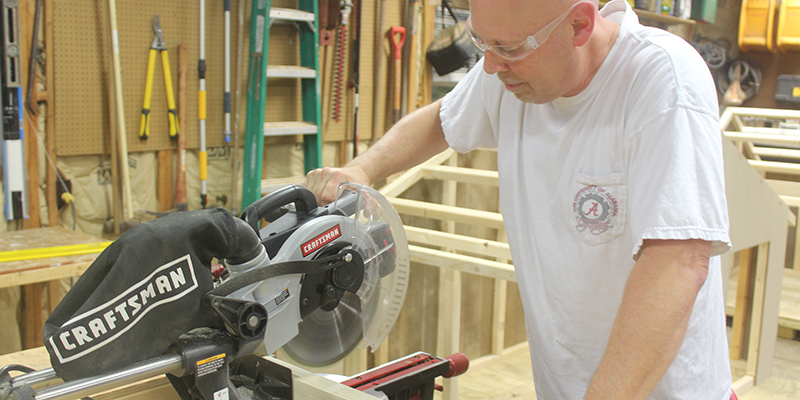 But the minute Blackmon returns to his home in Valley Grande each evening, he’s back to work – building dog houses.

The son of a carpenter, Blackmon grew up learning the trade from his father.

“We built this house,” said Blackmon, gesturing to his home.

Blackmon also built the workshop where he constructs his dog houses each evening.

After constructing an actual home and a sizeable workshop, you would think building a doghouse would require very little effort, but Blackmon pays just as much attention to detail to his doghouses as he did his own home.

Blackmon has only begun dabbling in dog houses during the past two years.

After his children grew up and left the house, he began using his new free time to do woodworking projects like those he grew up around.

“I started with little things like toys and then I built a table,” Blackmon says, pointing to a clearly very well constructed piece of furniture the like of which would be found in a Restoration Hardware or Pottery Barn catalog.

“Eventually I ended up building a dog house,” said Blackmon.

Though Blackmon doesn’t really think that first doghouse was anything special, a friend of his disagreed.

“A friend of mine said, ‘Hey, I like that, can you make me one of those?’” said Blackmon.

From that single, simply constructed doghouse, Blackmon’s side business grew and grew.

Blackmon described that first doghouse as, “a box with a slanted roof,” but the canine abodes he constructs now are anything but basic.

The list of features Blackmon has included in his dog houses rivals that of some human homes.

The most fully involved doghouse Blackmon has ever constructed was built in the style of western building that wouldn’t look out of place on the dusty streets of a Clint Eastwood film.

The five-foot-high, six-foot-wide and five-foot-deep structure was fully insulated with interior walls, contained two side access doors for cleaning, and was fully wired with light fixtures.

Blackmon has even constructed dog houses with screen porches and one with a deck on top.

“I always try and improve on what I do,” said Blackmon. “As I went from one doghouse to the next, I was always looking for something I could do better.”

Despite Blackmon’s portfolio of stylish and well-constructed doghouses, he’s had people approach him to build a doghouse quickly and cheaply.

“I don’t really want to do that,” said Blackmon. “I’ll send them to someone I know who builds them cheaper. If I’m doing something, I’m going to do it right. That takes extra time.”

With a full-time job, it’s a wonder Blackmon has found the time to build up such a successful side hustle.

When you consider how much time the average person wastes staring at the television, though it’s no mystery where all of Blackmon’s “extra time” to complete his projects comes from.

“I’m not a TV person,” said Blackmon. “It’ll sit there for days and not even be turned on.”

Aside from his aversion to television, Blackmon finds time to complete his projects simply because he loves doing it.

“There’s just something about seeing something completed that looks nice,” said Blackmon.

His builds have been delivered all across the southeast including Florida, Georgia, Mississippi, Louisiana and South Carolina.

Blackmon has even had someone from California contact him to commission a dog house, but there would be no easy way to get a dog house across the country.

After each dog house is completed, Blackmon personally delivers each one to his clients.

“Of course I have to charge for delivery,” said Blackmon, “But I don’t mind delivering.”

Blackmon and his wife, Tammy, like to make trips out of the deliveries, making a point to see all of the sights between their home in Valley Grande and their dog house destination.

When Blackmon began building the dog houses two years ago, he never thought he’d be delivering them across the southeast.

“It’s been really exciting watching this business grow,” he said.

Bill admits, he was a little hesitant we he began his venture, but after seeing so many smiles on faces from his customers, he got excited about it too.

Blackmon’s venture has grown from a simple project commissioned by a friend, to where if he received any more business, he’d have to quit his job and build dog houses full time, a path his wife, Tammy, has asked him to consider.

“I wish he’d do it full time,” she said. “He just looks so satisfied whenever he completes a project.”

Blackmon isn’t quite ready to say goodbye to his industrial maintenance gig at Seoyon E-Hwa, but he looks forward to building as many doghouses as he can after he retires.