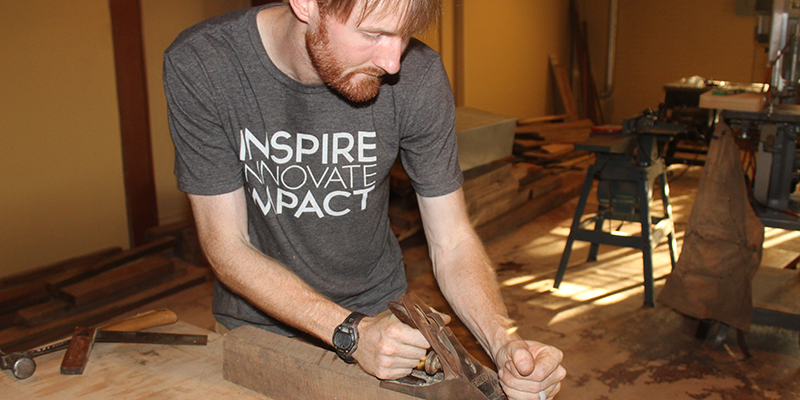 Sam Gindlesberger is making his mark in the Queen City with his woodworking business Live Oaks Woodworking.

His wife, Taylor, a Chilton County native met the Ohio native Sam in school in Kentucky at Asbury Seminary in Wilmore, Kentucky.

“While we were at school, we got connected with Bob Armstrong and Blue Jean Church,” he said. “My wife spent two summers doing an internship and through the first summer she fell in love with the people of Selma and the second summer I came down here too and we got our feet wet with the internship and after we graduated we moved here.”

The move here was easier with the group the couple had already made connections with.

“In some ways, we stepped into some unfamiliar things but we also knew a lot of people who are roughly our age. We had those connections already and it was a game changer. It has been a good experience so far.”

Sam and Taylor had the intention of opening a business here where he would do woodworking and Taylor would sell pottery.

“It is a pretty risky thing if you think about it; moving to a new place and starting a business and seeing if it works but so far so good,” said Sam.

Sam said woodworking was instilled in him at a young age.

“It was really something I just had a natural affinity for when I was little I was obsessed with tools and I still am,” he said. “I grew up around it and when I was 16, one of my first jobs was I worked for my neighbors who was a father and son team that did custom cabinets. The father was old enough to be my grandfather and the father was roughly my dad’s age. The work I was doing was not technical at all it was very medial tasks, but they were just incredible guys and it was really good exposure.

“At that point, I thought the dream had come full circle,” said Sam. “I thought I had always wanted to do this and I have now and I thought I’d be free to go do other things. As I ended up pursuing more and more at school, my grandfather, who had a really similar passion for woodworking, I really got close to him and spend more time with him in his later years. He lived to be almost 92. Five years before he passed, he had a heart attack, stroke and pneumonia and he was pretty much confined to a chair. He had this workshop that was set up with all these tools that he had bought and had plans to do things that he never did.”

It was then that things changed for Sam.

“With his passing I inherited not only the tools but I also inherited the lesson of don’t wait to do something that you’ve always wanted to do,” he said. “I thought about how even the guys I had worked for how formative that had been and it had me thinking that this would be a cool thing to do in Selma.”

With that Sam decided to put his dream into motion.

“Right now, it is just entry level growing a business,” he said. “The eventual hope would be for Taylor and myself to use it in a way that not only provides value to people in the community but also helps develop the community through job creation and some of those things.”

“I’ve done a whole smattering of things everything from refinishing projects to handyman and construction,” he said. “I’ve crawled under people’s houses. I’m happy to do the dirty work and everything in between. Custom tables and an island. It kind of runs the gambit. I’ve been fortunate to connect with Mark’s Mart and do work over there. Any pressure treated wood that looks new I’ve done that. Helped out in Northport. I’ve also made some products that are at Marks Mart: cutting boards, six pack holders and coasters.”

Some of Sam’s favorite projects are tables but another favorite is building things for the second time, especially custom projects because it allows him to work through the design and improve the second time around.

The thought of running his own business became a desire after he was part of project in Kentucky where he helped build a treehouse.

“I got involved in that project and saw a lot of the potential,” said Sam. “From that point on, I started down the self-employed path and that has opened up to everything else.”

While in seminary, Sam took part in the university’s version of Shark Tank, called the Asbury Marketplace Summit.

“It is a big thing where they talk about things like social entrepreneurship and basically start businesses that have some type of social impact or social need and more than just a profit maker. They have this business plan competition where they have students from the university and the seminary pitch ideas they have created,” said Sam. “The idea of coming up with a business plan was terrifying. My degree is in Biology and I thought this is crazy. I nearly had a panic attack just trying to get my head around actually doing it.”
The prize money was something that pushed Sam to participate in the event.

“I actually ended up winning some prize money and that was a huge confirmation that this was something worth pursuing,” he said.

Starting his own business has been one that had a lot of support from people of Selma.

“We had connections with the church and people in the community,” he said. “They knew we were coming to start a business so, there was a lot of internal support. It was all a huge blessing that you couldn’t write into a business plan. Some of it was learning as you go.”

Sam encourages those who want to start their own business to work hard and to be consistent.

“It is deeply rewarding especially when you see elements of the vision that you have come to fruition,” he said. “We definitely experience that … but I think even at the same time there’s the sticky middle where you don’t need to get discouraged. The beginning of a project is exciting and the end is also very fulfilling, but sometimes you can just get stuck in the middle. It is worth the grit and determination that it takes to get through that especially for millennials the practical sense of being able to be your own boss and have your own schedule some of those flexibilities are really great and appealing.”