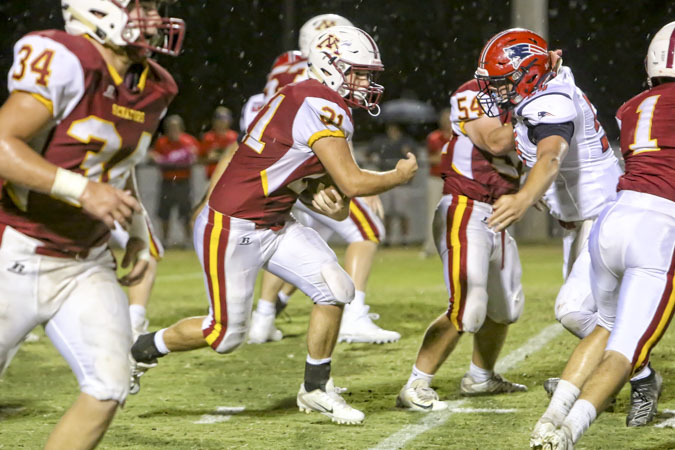 The game was completed from Friday night because of heavy rain and flashes of lightning.

“I can’t explain how proud I am of these kids, they gave it everything they had,” Senators coach Josh Thacker said. “Everybody on this team stepped up.”

The Patriots overcame the stellar rushing performance of Holt Utsey and Will Ingram, who each rushed for 144 yards and accounted for all three Senators’ touchdowns. Ingram scored twice.

Kicker Wade Mason made two clutch field goals, a 32-yarder to force overtime. His second field goal, a 32-yarder, gave the Senators a 27-24 lead in the first overtime.

The Patriots eventually kicked a 26-yard field goal to tie the game at 27-27 and force a second overtime.

The Patriots stopped Senators quarterback Andrew Thomas at the one-yard-line on fourth and goal.

The Senators overcame a 24-14 fourth quarter deficit on the strength of their running game, Ingram and Utsey. Thomas hit Utsey for a 28-yard pass on the Senators’ final drive in regulation.

“The players had every reason to hang their head, but they didn’t give up,” Thacker said.