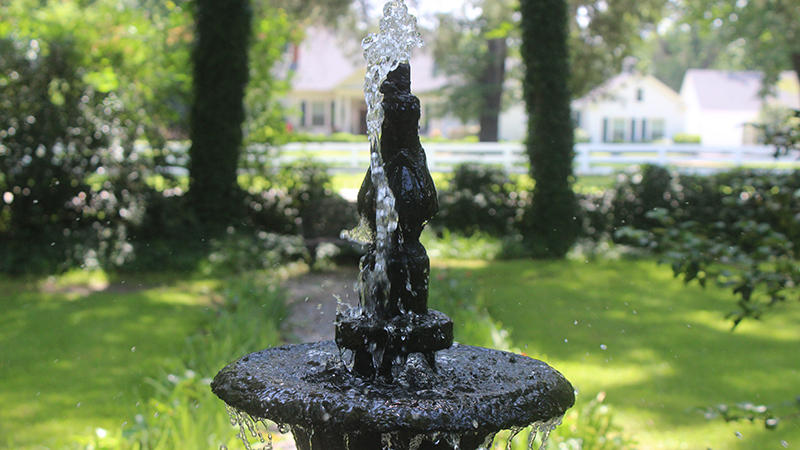 Ray and Angie Harrelson bought the J. Bruce Hain House in Sardis at the end of 2015 moving into the home in 2016. Being one of the first non-Hain-family owners, the Harrelsons have enhanced the property while also preserving the historic landmark.

“We bought it at the end of 2015 moved in 2016 prior to that it had only been owned by the Hain family,” said Angie. “We are the first non-family owners. It had been restored in 1998 but we made a few cosmetic changes such as painting. We waited a few months to move in for that we also bought more furnishings and we have done more landscaping and gardening but thank goodness, they (Hain family) had done a lot of renovations already and it had sat empty for about 20 years.”

The Harrelsons own Rayco Industrial, Inc. which celebrated 20 years of service last year. Angie said the location of the house was something that influenced the couple to make the purchase.

“Our business is only a couple of miles down the road and we would always pass by that house,” she said. “We are originally from Covington County and every time we would go back home to visit family we would for years pass by that house, and we have always loved that house. Even one year, when we weren’t in business that long, I served as a hostess for the Dallas County Pilgrimage at the house and we never really thought about owning it then. We noticed it came up for sale and we went and looked at it one time before and kind of decided against it we thought it was too big of a house and not sure if we wanted to move out of town. Few years later we decided that we wanted to do this.”

Angie said that the move has made it convenient for work and the times in the country are quiet as well.

“We enjoy the quiet out here in the country,” she said. “There are 12 rooms and it is built on a large hallway going through both stories and it has five bedrooms four on the top floor and one of the bottom floor and we have a library on one side of the parlor and a dining room on the other side.”

Sam Golson, a local home decorator, has been working on the garden and decorating of the house since the Harrelsons moved into the home.

“Pretty much from the get go we knew we needed someone to come in and help,” Angie said. “The grounds had a lot of shrubs and many different camellias. There was not a lot of flowers and we had people that were cutting the grass and when they stopped, we had a lot of perennials that have come back now including daffodils and lilies because we have allowed them to come back up. There are really tall magnolias and different things in the yard. Sam has really worked on keeping everything pruned and getting the yard some color. We have a little fountain area with the walkways. He has planted all around the house, all over, really.”

Angie said she has her favorites around the garden.

“We really love the caladiums that have been brought in out front,” she said. “We really added a lot of angel wing begonias they are really gorgeous they really add a lot of color. The fountains have been there but we had a deer that messed up the one with the goldfish pond but we are working on getting that up and running.”

Golson has made some additions to the home since the Harrelsons have moved in.

“Since we have been at the house, we have had the four seasons statues added in and we have worked on adding a lot of succulents and we also like our peacock however he lost all of his feathers right now, so he’s not too proud of himself he is molted right now.”

Golson and Angie both agreed it takes a month or so to plan out what to plant for the coming year.

“Last year my husband decided he wanted to work on a fence out on the farm,” she said. “We didn’t get to dig the caladiums up and save the bulb so we had to re plant all the caladiums this year. Last year, we had gorgeous caladiums everywhere, but the cold got them so we were a little upset about that. We had snap dragons because they were just gorgeous but we really like the begonias and they will come back. We like to plant something that will come back on its own and we also planned on planting a lot of ferns this year and we are hoping that that they will take off as well.”

The J. Bruce Hain house has been featured in the Dallas County Pilgrimage tour since the Harrelson’s ownership.

“We had it open year as the Friday night host house a couple of years back,” she said. “We also had the Lowndes County Preservation Society come and visit on their annual trip back in April.”

According to the National Register of Historic Places, the J. Bruce Hain house was built in 1913 for J. Bruce Hain and his wife by Selma builders W.D. Rutledge and Thomas Franklin Pearson.

Agnes Chance, the granddaughter of Thomas Franklin Pearson, states the house was built on a handshake and that her grandfather rode his bicycle daily from Selma to Sardis, which was a distance of about 10 miles, to work on the construction site.

Hain’s children, Edward Moore Hain and Bruce Valentine Hain, who was considered a prominent attorney and state legislator, according to the registry, were born in the house and lived there along with Bruce Hain along with his older children by his first marriage to Sally Hardy Hain.

The registry also states that Bruce Hain had the house built for his second wife, Ellen Mae Moore, and that he was a respected planter and cattleman.

“From the outset, cattle were part of the Hain enterprise; and the railroad met important transportation needs,” the registry states.

Outbuildings on the property includes a circa 1913 below ground brick greenhouse.