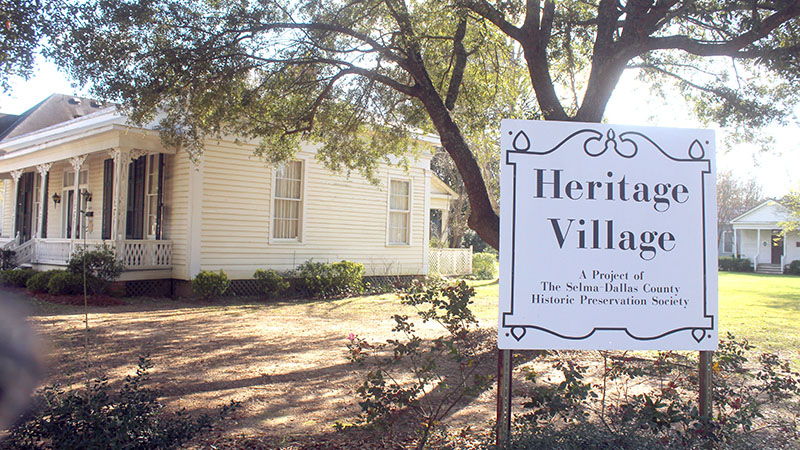 The Heritage Village is the site of several 1800s structures that were donated to the society by private individuals.

Located adjacent to Sturdivant Hall at the corner of Mabry Street and McLeod Avenue, the buildings are the Calhoun Law Office, McKinnon-Riggs Doctor’s Office, Siegel Servant’s Quarters and the Pigeon Cote.

The village also includes the Gillis House and Minnie Sue’s Cottage, which are now private residences.

The James M. Calhoun Law Office, circa 1833, is a one-room structure that features antique furniture, ledgers and books. The Greek Revival building has four Doric columns and a front porch. The building was moved from Carlowville where it had been used for storage. Calhoun, who was born in South Carolina, was a lawyer and planter in Dallas County. His law office is a replica of the office of American statesman John C. Calhoun, his uncle. James Calhoun served as a member of both the House of Representatives and the Senate between 1831 and 1861 and served two terms as president of the Senate. The office was donated by Andrew Calhoun, grandson of James Calhoun.

The small 1800s doctor’s office was moved to Selma from Pleasant Hill and furnished with antique furniture and medical equipment. The building is a one-story, Greek Revival structure, which has Doric columns, a full-width porch and square-rail balustrade.

H.B. Boynton used the building first as a law office from 1852 to 1871. Later, Dr. Kenneth McKinnon opened a medical office in 1871. Dr. S.W. Riggs practiced in the building from 1905 to 1945 and was followed by Dr. William Staggers of Benton during the 1950s. Prior to its move to Heritage Village in 1981, the office had fallen into disrepair and was almost torn down when the heirs of William B. Jones (who purchased it in 1946 for $300) donated it to the Historic Society. The exact date of its construction is unknown.

The one-story servant’s quarters, circa 1900, was located behind the main Siegel house on the northwest corner of Dallas Avenue and Union Street. The one-story building has a roof of wood shingles and foundation of brick piers. The Siegel family donated it to Heritage Village.

The pigeon cote was constructed when pigeons were raised for food. It was moved from behind a carriage house on the northeast corner of church Street and Parkman Avenue.

The Gillis House, circa 1850, 623 Mabry St. is a one-story, Greek Revival with an Italianate porch. It once occupied a lot on Washington Street and was moved here where it is now a private residence. Gardens behind the home were added by a florist and feature a variety of plants that are not native to the area.

The 1830 cottage, Minnie Sue’s Cottage, is located at 622 McLeod Ave. and is located at the rear of Heritage Village and is privately owned. Local historians say the house is built from hand-hewn timbers and joined with wooden pegs. The house is named for Miss Minnie Sue Neville, who owned an antique shop in Selma. It was moved here in 1910.

In October of 2018, the Alabama Historical Commission awarded the Selma-Dallas County Historic Preservation Society $17,500 to assist with the Heritage Village project.

According to the description of funds use from the society to the commission, Minnie Sue’s Cottage would need a total of $12,800 in repairs including repairing the roof ($1,200), painting the metal roof ($1,800), updating electrical systems to meet code ($5,100), replacing wood on fences and floors ($600), repairing walls and repainting the damaged area ($1,800), removing overgrown vegetation ($500) and a handicap ramp from parking space to the porch ($1,800).

At the McKinnon-Riggs Doctor’s Office, an estimated $5,300 is needed to repair this structure including $1,200 to repair shutters, base of columns and the porch, $2,600 for scraping and painting the exterior and $1,500

The Calhoun Law Office needed an estimated $1,000 for repairs to the shutters, window frame and sill and rotten wood areas.

The Pigeon Cote needed $200 for door repair and painting the exterior of the structure.