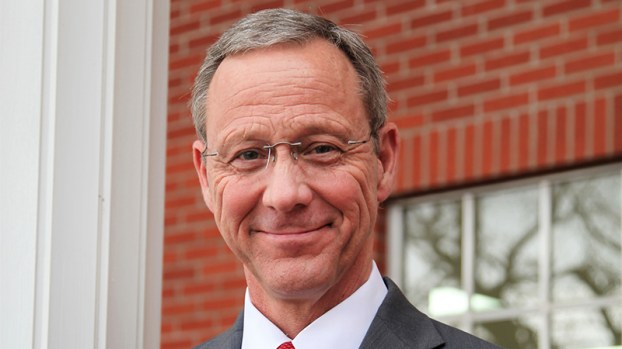 After a year-long national search, the Judson College Board of Trustees has named Dr. W. Mark Tew as the institution’s twenty-third president.  Tew follows Dr. David E. Potts, who served as President of Judson College from 1990 until 2018.

In July, the committee enlisted the aid of executive search firm Myers McRae.  From the pool of more than 60 applicants, the committee selected five highly qualified candidates for in-person interviews.  Tew was unanimously chosen as the nominee by the committee, and on March 8, the Board of Trustees voted to employ him as President of the College.

“I am delighted that the Board of Trustees accepted the committee’s recommendation to call Dr. Tew as the College’s new president,” said Sanford.  Daphne Rudicell Robinson, Judson alumna, search committee member, and Vice Chair of the Board of Trustees, said that Tew “clearly emerged as the right person at the right time”, citing his “experience in higher education and love of the Perry County community” as “invaluable” characteristics of the incoming president.

A native of Birmingham, Tew is both a product and practitioner of Baptist higher education.  He holds Bachelor of Science and Master of Business Administration degrees from Samford University, as well as Master of Divinity and Doctor of Theology degrees from New Orleans Baptist Theological Seminary. In his more than three decades in higher education, he has served three Baptist institutions: Judson College, Southwest Baptist University in Bolivar, Missouri, and, most recently, Howard Payne University in Brownwood, Texas.

Tew has served as Provost and Vice President for Academic Affairs at Howard Payne University since 2007, supervising areas that included academic advising, institutional research and effectiveness, library and information technology services, and enrollment management.  Under his leadership, the university added pre-licensure BSN and post-licensure RN to BSN programs, the Bachelor of Science in Engineering Science, and five master’s degree programs, including the Master of Education in Leadership, Master of Business Administration, and Master of Arts in Theology and Ministry.

Focusing on continuous improvement, Tew has introduced and implemented new academic evaluation measures, including a strengthened faculty evaluation process and a review of Howard Payne’s general education curriculum.  In his role as Provost, Tew developed an excellent track record for recruiting highly qualified faculty members committed to providing higher education in an unapologetically Christian environment, and twice served as a special guest at Baylor University’s Seminar for Academic Leadership to address the recruitment of faculty to faith-based institutions.

Tew led Howard Payne’s trustees, faculty, and administration in the development, adoption, and implementation of new mission, core values, and vision statements, as well as a strategic plan that focused on revenue enhancement and student success.  Tew supervised a number of physical plant improvements, including the $3.5 million restoration of the circa-1920s Mims Auditorium and the $1.5 million renovation and construction of the Jane and Paul Myers Faith and Life Leadership Center.

Tew has served as the chair of twenty onsite reaffirmation committees for the Southern Association of Colleges and Schools Commission on Colleges, the regional body that accredits hundreds of colleges and universities in the southeastern United States.

Tew began his career in higher education as a religion professor at Judson College in 1987. He received the Lula and Alton Holley Award for Excellence in Classroom Teaching, an award given by graduating seniors to the faculty member who has most enriched their academic experience at Judson, only two years later.  In the twenty years that followed, he would serve as the chief finance officer, the chief development officer, and the chief academic officer.  Tew supervised $8 million in campus renovation, restoration, and construction efforts in the 1990s and 2000s, which included the renovation of Jewett Hall, the development of the Charles F. Dunkin Athletic Complex, the refurbishment of Alumnae Auditorium, the construction of Marian Acree Tucker Hall, and the restoration of Judson’s Carnegie Library, now known as A. Howard Bean Hall, which houses the Alabama Women’s Hall of Fame.

In addition to overseeing the development of Judson’s first local area computer network, Tew developed the College’s first annual effectiveness report, institutional fact book, and budget procedure manual.  He led the campus-wide team that established the strategic plan for the years leading up to Judson’s 175th anniversary. Just before his departure from Judson in 2007, Tew led the faculty in the development of the Bachelor of Social Work program.

In addition to his work at Baptist colleges, Tew has used his passion for teaching to serve numerous congregations.  He has served as pastor, associate pastor, or interim pastor at nine churches in Alabama, Texas, and Louisiana, and has been a guest speaker or conference leader at more than fifty churches.  In 2012, his book, “Luke: Gospel of the Nameless and Faceless,” was published by Wipf and Stock.

Tew has been married to his wife, Ann, for 36 years.

The Tews have three children and seven grandchildren.  Their daughters, Elyse Weeks, Clara Owenby, and Nicole Bean, are all Judson graduates.

“Ann and I are deeply honored to be asked to return to Alabama and render service to Judson College, Alabama Baptists, and the Kingdom of God,” said Tew. “It will be our privilege to work on behalf of Judson’s distinguished alumnae and talent-laden students to accomplish the vital task of Christ-centered higher education. I am humbled by this extraordinary opportunity and eagerly anticipate working with the College’s dedicated and loyal trustees, faculty, and administrative personnel. Education that is taught from a biblically informed Christian worldview is more necessary in today’s society than ever before. To that end, we will cherish the prayers of all who believe Judson’s future is even brighter than her glorious past.”
A welcome reception for the Tews will be held in the Gladys Hale Dunkin Parlors of Jewett Hall on Friday, April 5 from 3-5 p.m.