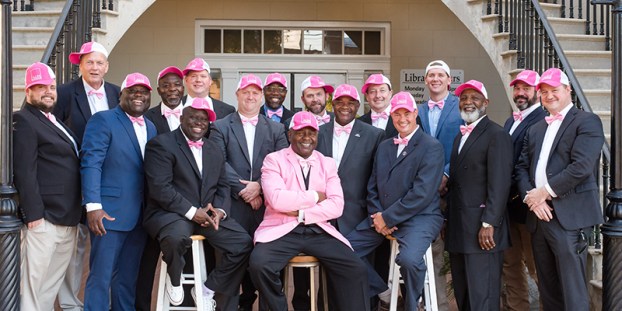 The American Cancer Society (ACS) has been instrumental in the fight against cancer for 105 years.

Amongst raising funds towards the cause, ACS provides free lodging to cancer patients seeking treatment away from home.

Bridget Mills, Sr. Community Development Manager for the American Cancer Society, said ACS has touched so many lives in the Dallas County area.

“ACS is critical in the fight against breast cancer. ACS is the number one non-profit funder of cancer research, to include breast cancer research,” Mills said. “There are many in Dallas County who recognizes the support of ACS as a major part of their cancer journey.”

As of March 2018, the organization has invested $62.6 million in breast cancer research grants.

Throughout the years, the ACS has made many efforts in finding new and innovative ways to gain more funding.

Real Men Wear Pink (RMWP) is one of those initiatives, and since its inception in 1969, the movement has raised more than $6.5 million towards saving lives from breast cancer.

“Real Men Wear Pink is an effort to promote breast cancer awareness while engaging dignitaries in a community to help fundraise for the American Cancer Society,” Mills said. “The campaign has quickly spread around the country and currently happens annually in numerous states.”

According to the ACS, more than 1.5 million patients have received one-on-one support from the initiative.

“Real Men Wear Pink was created to give men a greater presence in the fight against breast cancer,” Mills said. “It is a fundraising and awareness campaign to support the mission and work of the American Cancer Society.”

Real Men Wear Pink leaders commit to wearing pink throughout the month of October and raising awareness via social media. Each participant is also responsible for raising money towards the fight for breast cancer.

Each service area can set their own monetary goals for participants based on their location.

ACS sees the initiative as a way for men to gain a leadership role in a fight that is generally mainly female driven.

According to the ACS, besides skin cancers, breast cancer is the most common cancer type in women, and about 268,670 new cases of invasive breast cancer will be diagnosed in 2018.

The disease can also affect men, and Mills believes male representation helps erases the stigma that is attached to the disease.

“Having the faces of men wearing pink for this campaign gives them a voice to show their support to their wives, mothers, grandmothers, sisters, aunts, nieces, granddaughters and friends, but also to show that breast cancer is not limited to intruding on the lives of just females, but males as well,” Mills said. “There are several men in our community and surrounding areas that have been diagnosed and survived breast cancer.”

Real Men participants are asked to think of new and innovative ways to meet their goal. The ACS believes that is it the innovation and thinking outside of the box that helps participants become a top fundraiser.

After sharing the RMWP campaign goal with community members, men started to join the effort.

“Alvin Craig formed a planning committee that immediately began to work and planned the first campaign that took place in 2017,” Mills said.

After choosing a planning committee, it was then time to recruit participants in the community.

“Committee members and ACS staff recruited local businessmen and leaders by sharing details of the campaign and asking them to join,” Mills said. “The committee is pleased that they have received very few declinations, as the majority of those asked has graciously accepted the challenge.”

This year marks the second year of the local campaign. Last year, the “Real Men” raised $20,000 in less than one month.

In addition to raising breast cancer awareness and funds towards the cause, the RMWP participants also have some friendly competition.

“Community leaders commit to leading the way with bringing awareness about breast cancer prevention and early detection, while participating in a fundraising competition,” Mills said. “The [Dallas County] RMWP candidate that raises the most over $500 is crowned the Top RMWP candidate.”

This year, RMWP of Dallas County had 30 candidates:

For more information on the local RMWP campaign or to donate towards the cause, visit www.realmenwearpinkacs.org/dallascoal.