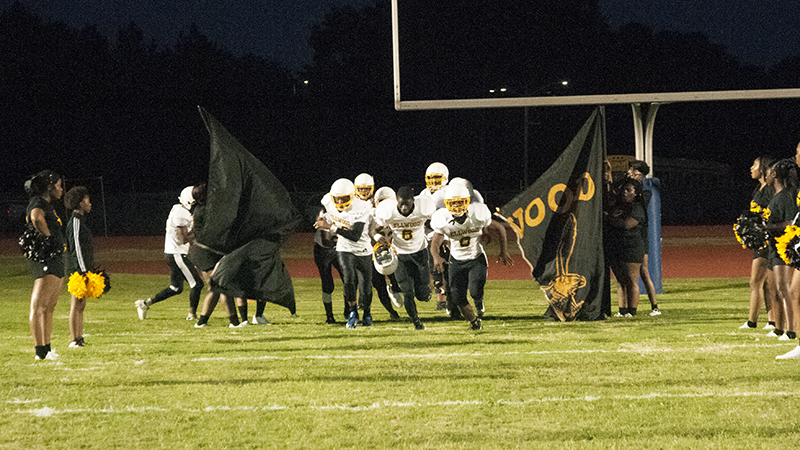 RUSHING IN: Ellwood Christian Academy bursts through their banner as they prepared to take on Autaugaville Friday night.

The Autaugaville Eagles picked up their first win of the season on Friday night at Memorial Stadium in a 42-8 victory over the winless Ellwood Christian Academy Eagles.

Ellwood is now 0-5 this season.

“Autaugaville has a fine football team. We made a lot of mistakes and had a lot of stupid penalties,” Ellwood Christian’s head football coach Migeual Catlin said.

However, Ellwood picked up some momentum in the second quarter stopping a couple of extra point-conversions and intercepting the ball with 1:29 left in the half. The moment was short lived as the half ended with Autaugaville leading 12-0.

“We were behind two scores and we started hanging our heads, and that’s just something we can’t do,” Catlin said.

After a few drives and back-to-back penalties by Autaugaville, Ellwood scored their first and only score of the night making it 20-6 with 7:27 left in the third quarter. The team then successfully went for a two-point conversion making the score 8-20.

With just under three minutes left in the third quarter, Autaugaville caught an interception and forced a turnover.

Ellwood’s next game is at Maplesville on Friday, Oct. 5.

Keith gets defensive in 29-20 win over Southside