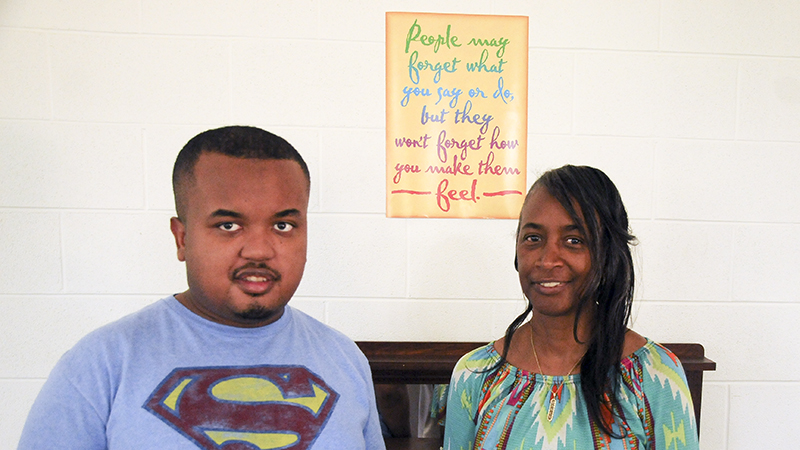 Karen Pettaway (right) founded the Orrville Resource Center so her son, Dorial Pettaway Jr. (left) and other adults with special needs can have a place to call their own.

The Orrville Resource Center was preparing for art camp to get started Thursday morning, and Dorial Pettaway Jr. was there to help in his blue Superman T-shirt.

He goes to the center Monday through Thursday where he likes to exercise, interact with his friends and work on his reading skills. Every day, he packs his book bag with his books, CD’s and DVD’s to take with him to the center. His favorite food is shrimp and he’s a fan of the Disney TV series “The Proud Family” and “Kim Possible.”

When he was 10-months old, Dorial was diagnosed with meningitis and he has had multiple seizures throughout his lifetime.

Meningitis is the inflammation or swelling of the protective membranes covering the brain and spinal cord, and approximately 600-1,000 people contract meningococcal disease in the U.S. each year according to the National Meningitis Association.

“My son has a developmental disability and he is also an epileptic,” Karen Pettaway said. “With that, he does learn at a slower pace. So, I started looking for ways that I could help him.”

Dorial, 22, graduated from Selma High School in 2014. But due to his disability, he needed a new place to go and spend his time now that he had finished high school.

Unfortunately, the resources available to young adults with disabilities are limited in Dallas County and even more so in Orrville.

Karen attempted to get Dorial into the Cahaba Mental Health Center in Selma, but he remained on the waitlist.

“Because there were so many people on that list, I just didn’t want to have him sit out,” Karen said.

Had he been admitted, Dorial would’ve had a place where he could go and participate in activities every day.

“If you look around, you can see so many people with special needs who have no place to go,” Karen said. “When they’re small, they have day cares they can go to and after school activities, but once they leave high school there’s not a place for them.”

Instead of letting her son sit in front of a TV all day, Karen decided to take matters into her own hands.

Karen would drive Dorial to Montgomery so that he could have a place where he could participate in activities at his own pace. She would take him to the Montgomery Therapeutic Center where he could meet new friends in an environment for people with special needs.

Dorial participated in the Special Olympics when he was at Selma High, and he loves sports.

Since 2012, Dorial has made the trip to play baseball in the Montgomery Miracle League each Saturday from the end of March to the second Saturday in May.

He will also call out a “War Eagle” in support of his favorite college team, the Auburn Tigers.

“It makes me feel good knowing that they can get up in the morning and prepare themselves to come for their time here,” she said. “Our motto is ‘A Place Where You Can Laugh Again,’ and that’s what we try to do daily.”

The Orrville Resource Center opened in October 2017 with six “students” including Dorial. It is a small one-level community center located on 2360 Dr. J.T. Moore Road in front of a pasture with grazing cows.

“The vision that I had was that they needed a place that they could call their own,” Karen said. “It was a vision from the Lord, and once we started the resource center, it became a place where they could come and build friendships among themselves. They don’t have to just sit on the sidelines and watch other people do things. They can do it, but just at their own pace.”

The center provides both physical and educational activities for its members. Karen has four assistants who come in to help lead the activities.

After retiring from Wilcox County High School, Ashmon taught at both Selma University and Concordia College.

Ashmon’s daughter convinced her that the students at Karen’s resource center would also benefit from having a teacher, and that’s how she got involved.

“I intended to go there one or two times, and it just kind of grew,” Ashmon said. “In this community, except for recreation or some things that are not so nice, there are very few things to do. There’s not a library like in Selma, and we don’t have as many places for them to go if they need help. So, for Ms. Pettaway to come up with one has been very important.”

The center is open for new registrants ages 17 and up who have special needs and want to have a place to socialize throughout the week.

“That was my main goal,” Karen said. “That they wouldn’t just sit at home watching TV and movies. I wanted to get them out in the community doing something constructive where they could learn.”

This upcoming Saturday, the Orrville Resource Center is hosting its first Fun Day from 9 a.m. until 1 p.m. There will be face painting, basketball, an old-school car show and more for the community to come out and enjoy.

The proceeds from the event will go towards new supplies and upgrades for the center.

“We’re excited because it will help us get funds,” Karen said. “We’re looking to get funds in to purchase things that we need. We have limited stuff here now, but I’m looking to get more. They want to be like everyone else, and I want them to have fun.”