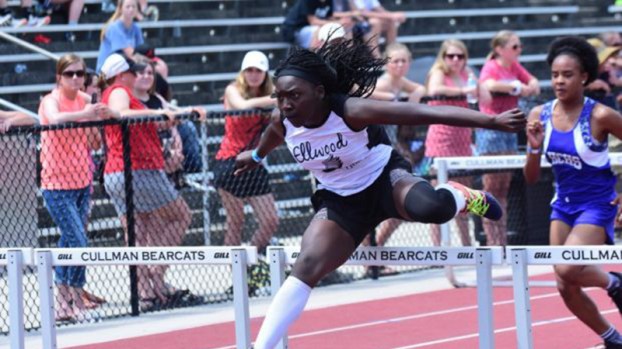 Rashni Walker, an eighth-grader at Ellwood Christian Academy, won the Class 1A state championship in the 300-meter hurdles at Cullman High School Saturday, May 5, but left the state meet disappointed she didn’t sweep her events.

“I’m an eighth grader, and I’m winning state,” Walker said. “I know I’m competing on this level, at this age, and I can compete to win. That’s what makes it special for me.

Walker finished the 300m hurdles in 45.90 seconds, which a new personal-record for her. Her time was also better than the 2A and 3A competitors as well.

She was actually hoping for a better time, but an ankle injury during the long jump event the day before slowed her down for the rest of the weekend.

“When I tried to walk around on it, [the pain] was like a seven or an eight out of 10,” Walker said. “Then it grew to a nine, because it started to swell up really bad.”

Despite the injury, Walker’s 4.98-meter jump was still good enough for third place in 1A.

The long jump was her only event Friday, so she and her coach Jeffrey Walker nursed the injury overnight to prepare for the track events Saturday.

“I was praying to God that I’d be able to run, because I didn’t want to just give it up like that,” Rashni said.

“It was a little pain left,” she said. “But it felt a lot better and I was able to do what I needed to do on the hurdles.”

During the preliminaries, Walker ran the 100m hurdles in 15.42 seconds.

The injury added 1.49 seconds to her time, and she hit six of the 10 hurdles. The extra time held her back from potentially having one of the top 10 times across all seven high school classifications.

Even though she didn’t quite reach her goal, Rashni will be an athlete to keep an eye on as she matriculates through high school.

She won the 1A state title in both the 100m hurdles and the 300m hurdles as a seventh-grader, and her goals reach much higher than that.

“My dad keeps saying I haven’t brought my beast mode out,” Rashni said. “So, I’m trying to bring that out and see what I can really do.”

Rashni is a year-round track star who has been competing at regional and national USATF events since she was in fourth grade.

“I tell all my kids in the Walker Track Club and their parents that if they’re able to compete on the regional and national level, then winning a state championship won’t be a problem,” Jeffrey said. “When you’re an All-American or champion on the national level, that’s where we’re trying to get to.”

Standing in her lane between high school athletes and taller girls with longer legs doesn’t faze her as she focuses on beating them all to the finish line. She keeps a list of goals on the wall in her house, and the main one is to stay focused even while she’s running.

“I just want to be able to stay focused, and keep my mind set on what I’m trying to do and what I want to do in life,” she said. “I want to have more of what life could give me.”

The stadium lights were on at Memorial Stadium Friday night as four high school football teams played a series of... read more