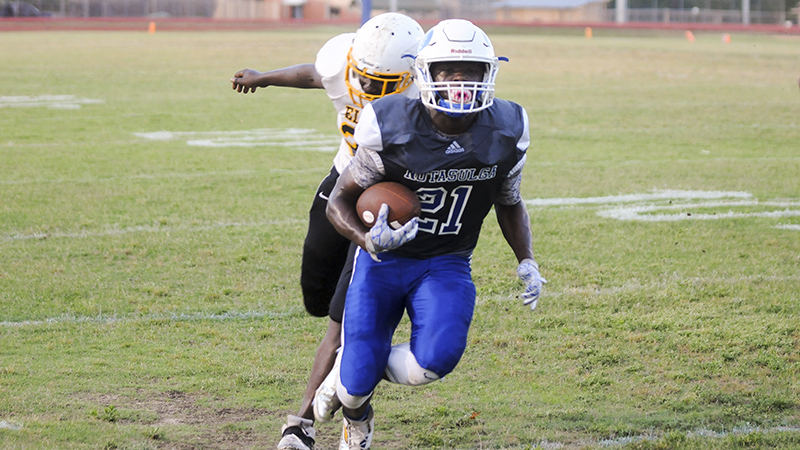 The stadium lights were on at Memorial Stadium Friday night as four high school football teams played a series of spring football exhibitions to end the year.

Ellwood Christian Academy hosted the Notasulga Blue Devils, the Calhoun Tigers and the Barbour County Jaguars for their Spring Jamboree.

The Jamboree concludes the spring practice period for each team as the coaches evaluate their players and see what they have before school lets out.

The sidelines were loud and busy, as the coaches yelled in instructions and adjustments. A sign that players still have some learning to do before they are confident in their assignments.

Still, the players from each team showed they were ready to compete against a team in a different colored jersey.

The Jamboree was split into multiple 12 minute quarters so each team could get enough playing time for their roster.

“I’m very happy with the youngsters that we have,” Notasulga head football coach A.J. Jones said. “We had a pretty good spring. I’m glad to see some guys that grew up tonight. I’m proud of how the guys played as a group.”

The Blue Devils put up 20 points against the Tigers in two quarters to start the evening. The Blue Devils were able to control the tempo of the game and limited Calhoun’s offensive opportunities.

“They competed hard, and I was happy about that,” Calhoun head football coach Ervin Starr said. “We had a long spring over three weeks, and this was the culmination of it.”

Notasulga carried that momentum into its second matchup against the Ellwood Christian Eagles. Despite a late threat, the Blue Devils maintained their spring shutout and ended their day with a 14-0 showing against the Eagles.

Blue Devils running back, Daryl Brown had two touchdowns against ECA, and was the best back on the field Friday night. He had multiple rushes more than 10 yards, including a breakout 60 plus yard run.

“He uses his smarts on the field,” Jones said. “He’s an extra coach. He can put guys where they need to go, and that’s a guy that I’ve been waiting on for a long time.”

Brown will be a player to watch for the Blue Devils in the fall.

The Eagles, who are looking to replace several starters from the 2017 season like Ja’Mel Phillips, Malachi Washington and Katavious Olds, are looking for new players to step up.

The Jamboree was also the first game with the teams’ new head coach Migeual Catlin.

Catlin just joined the Eagles at the start of spring practice, so his goal for the Jamboree was to evaluate the effort of his players.

“It’s been a good two weeks so far,” he said. “The kids are learning and we’re moving in the right direction. We were looking at how much effort they were going to bring. That’s what we’re trying to get out of this.”

Several penalties and miscommunications hurt the Eagles ability to move the ball efficiently against the Blue Devils, but Ellwood Christian’s new quarterback Londarius Dean showed some promise with a 20-yard run late in the exhibition.

“Dean makes smart decisions with the ball,” Catlin said. “I think as the season goes on, he could be a whole lot better. For the most part, I think he managed the game well.”

The Jaguars lined up for their first matchup of the evening with a one-quarter scrimmage versus the Tigers.

“We’re turning the corner,” Barbour County head football coach Harry Mose said. “It’s always good when you start to play someone else. We wanted to come out and work on the fundamentals. It’s not about winning or losing, but getting better.”

The Eagles then played one more quarter against the Jaguars to end the night. It was a successful Jamboree for all four teams, and each team left knowing what needs to be worked on to prepare for the fall.