Sitting around a dining room table more than 20 years ago, the late Dot Wilkinson, late Kaye Knight and Lynn Sanders talked about the idea of starting their own dog sanctuary right there on their family property, Sky Hill Farm. Little did they know at the time, that idea would later come to fruition.

Before her recent passing, Knight donated the farm to what is now the Sky Hill Animal Society.

“Kaye Knight, her mother Dot Wilkinson and myself sat at this dining room table and talked about how we would like to do something like this one day,” said Sanders, the organizations’ director of operations.

“We discussed how we would like to do this. We didn’t know that we could really ever pull it together, it was just an idea.” 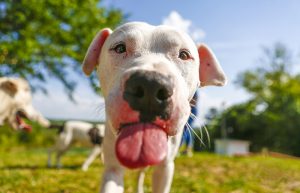 Sky Hill’s main objectives are to assist other local shelters or other entities, where unwanted animals are surrendered in providing the public with fully vetted animals for adoption, to provide the public with a subsidy program to assist with the cost of spaying and neutering, as well as to assist owners willing to keep their dogs, by offering temporary foster or financial assistance for needed care, maintenance or food.

Other objectives are to provide animal training and animal related activities to improve the relationship between owners and animals, provide assistance to those wishing to owner train dogs as service animals, to place rescued animals into permanent adoptive homes, to provide various groups such as foster children and persons with special needs, the opportunity to interact with animals, and finally to educate the public on how to help prevent animal cruelty.

“We have fostered for people who were homeless for a short amount of time that had to stay in a hotel room, but were toward getting a job and getting a home and being able to get their animal back,” Sanders said of some of the programs they offer.

“We have fostered for people who have gone into the nursing home for 21-day rehab situations … and didn’t want to have to give their animal up. So we fostered until they were able to get back in their feet and get their animal back.”

A big part of the organization is training and as their motto says, helping animals help people.

“We provide animals free to veterans that meet our criteria. Some of those animals are emotional support animals, and some of those are training toward service dog work.”

They also provide food through the Christian Outreach Alliance Food Bank for people who qualify for their services that also need food for their animals.

Before Knight’s recent death, she helped set up the goals and ideals of the society, making sure they were going to be implemented in the best ways possible.

Knight and Sanders even visited Best Friends Animal Society in Kanab, Utah for inspiration and research.

“When Kaye and I started going out to Best Friends Animal Society when we started forming more programs, we started thinking that we really could pull this together, that we might actually could do this,” Sanders said.

“We did a lot of research on what it would take to fund it, secured some funds, and was able to get it going.”

Knight was instrumental in the society until her final days, and Sanders said Knight enjoyed sitting in the sun room at the back of the house over looking the dogs as they played on the land she grew up on.

“Before Kaye passed, she liked to come up here and sit in the sun room and just be able to watch dogs that were used to having to be in a pen all day, play and run and interact in five acres that are fenced in for their entertainment and just be dogs,” Sanders said.

“People do not associate the shelter as a happy place, and Kaye was adamant that if we could get a place that the view is amazing, that the dogs were happy, everybody was safe, that more people would come out to volunteer and be part of the program.”

Those thoughts turned out to be true.

Sanders said she had 16 adoptions in the month of April, more than she has ever had, and more than 60 people volunteered in March and April.

“It’s been amazing since we’ve been out here,” Sanders said.

“Sometimes it’s still surreal that we actually made it this far from where we first started talking about doing this.”

Sanders said there are still many projects and programs in the works, like building specialized kennels for the dogs and getting a members only dog park where the dogs are assessed before being allowing to interact with other dogs.

Sky Hill Animal Society is formerly Humane Society of Central Alabama. The program will continue working with the Selma Animal Shelter in adopting out dogs and cats, with the help of Selma’s Purrrfect Pals.

Dogs can be adopted for $100 and cats are $50. For more information about seeing an animal, donating or volunteering or any other questions, contact Lynn Sanders at (334) 413-0476.

Local veterinarians Mark Lawrence and George Wood are president and vice president of the society.