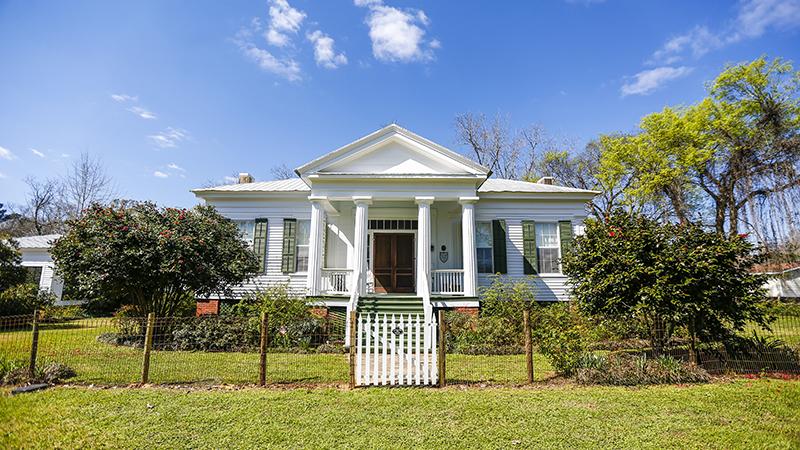 Built in 1843 in Summerfield, the Moore-Pinson-Tate-Hudson House sits at the beginning of Main Street.

The home was built by George King for his daughter and her husband.

It changed ownership throughout the years, until it ended up with Will and Edna Kate Hudson.

The couple retired at the home, followed by Bill and Cissie Hudson who also enjoyed their retirement years there, and finally Henry and Mary Beth Hudson who moved in two years ago and are carrying on the family tradition.

“My grandmother was raised in this house, then they retired here. Then my parents retired here in 1985, so we’re following a family tradition,” said Bill, who currently owns the home with his wife. “Mary Beth and I actually honeymooned in this house 42 years ago when we had not a penny. It was not renovated at all, but it’s always been a place from childhood that we came down here on weekends for quail hunting and fishing.”

Henry loved the home as a child, and always knew it would be his one day.

“During my childhood, it was a great place to be,” he said. “We always figured this was the place we would retire.”

The house was a little different when they honeymooned there in 1976 as Mary Beth recalls.

“We stayed a week and Henry chopped down overgrown bushes and scrubbed the front porch and I went and laid on the glider on the screened porch and read murder mysteries for a week while Henry continued to kill himself in the yard,” she remembered. 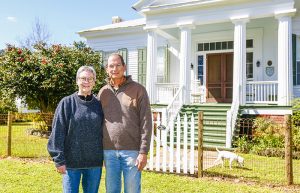 The first-time Mary Beth saw the house, it was a little different than it is today.

“When we got engaged, Henry’s parents had a little engagement party for us so we were coming down here and I had never been before,” she said.

Mary Beth said her friends laughed when she said she was going to Summerfield to the family’s home.

“The house had some issues at that point,” Mary Beth said. “There was no air conditioning, the only heat was from some gas heaters in the bedrooms, which meant the central hall was freezing.”

But it was still love at first sight.

“I had never been in a house like this. I’m a city girl and I had never really been out to the country either. But the place just gets you,” Mary Beth said. “I just love this house. I love the style of the house, I love the yard. It’s so peaceful and quiet here. It’s so nice.”

The Greek Revival house is simple in style with four bedrooms and a grand central hall and 14-foot ceilings.

It was renovated in 1984 to add what is now the kitchen and living rooms, along with a porch.

“All four rooms are identical and most of the furniture are family pieces. My grandmother always said we never had enough money to change anything,” Henry said.

“The simplicity and lighting in these rooms is wonderful.”

Henry remembers the home before the renovations, when it was cold in the winter and hot in the summer, and the trees that were just right for climbing.

“It was drafty and cold. It wasn’t renovated and it was hot in the summer. Daddy would get up early in the morning and build a fire in the fireplace and we would run over in the cold and warm up,” he said. “All the neighbors were great friends or neighbors. The backyard is filled with pecan trees for climbing and running around and shooting squirrels.”

Henry said his father and grandfather both loved to garden, and the apple didn’t fall far from the tree for him either.

“I love it. I’ve always loved to garden, it’s in my blood,” Henry said.

“I know the bushes that my grandfather planted and the ones daddy did. The pecan grove was planted by my grandfather. It’s a great privilege to be able to be a part of that.”

Henry is an Episcopal priest, and currently works some at St. Paul’s Episcopal Church, though he is retired. The couple obtained the home after his father died and his mother moved to Birmingham, but had to keep up with it from afar.

“We always came up for Thanksgiving week when we had the house, but didn’t live here,” Mary Beth said. “It’s a retreat, and now we get to do that every day.”

The couple always knew they would one day retire and live in the home, so through the years they collected furniture that they knew would look good in the house.

“We had acquired some things over the years, with an eye to the fact that they would work here,” Mary Beth said.

Henry said as old as the home is, they’ve never had a supernatural encounter, though the squirrels in the attic may make some think otherwise.

“When people come to visit, I always warn them that the squirrels are always trying to get in the attic for winter; so, if you hear anything it’s not a ghost, it’s a squirrel. And if you see any ghosts, they’re all friendly,” Henry joked.