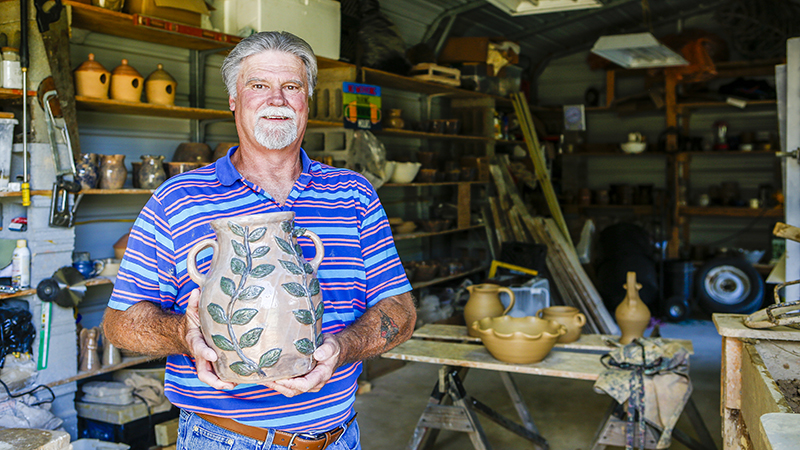 Allen Ham comes from a long line of folk potters. Dating back to the early 1800s, Ham’s family has always made things with clay.

He knew growing up he too would have the creative bug and make things on the wheel.

“I just grew up in it. I didn’t have a choice,” Ham said laughing.

Ham, a sixth generation potter, is a descendent of Francis LaCoste, an early 19th century potter out of Mobile Bay.

Abraham Miller, a former Union soldier, went to work for the LaCoste family and later married into the family.

Miller moved his family to Perry County and established himself as a potter in central Alabama.

Now, Ham and his uncle Eric Miller are still carrying on the family tradition. 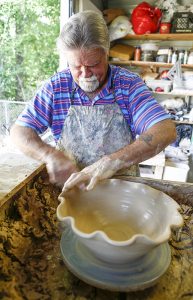 Though the generations of potters come from his mothers side, Ham also had a grandfather on his father’s side that worked with clay. For as long as he can remember, Ham has been working, or sometimes playing, with clay.

“I can remember sitting up at the wheel with my granddaddy, and he’d be making pots and there’d be clay on the table and I’d take my finger and make marks, and I could hear him fussing, ‘get you finger off there,’” Ham remembered. “With my granddaddy, we would make flower pots from a half gallon to 10 gallons. I would do 1,500 pounds of clay a day, that’s how much I would turn.”

Though he doesn’t spin 1,500 pounds on a daily basis anymore, Ham can still be found out in his shop turning away pot after pot and bowl after bowl.

“Now, I started in January, and I’ve used 1,500 pounds since January, Ham said in his May interview. “When I was working, I would come home every evening and make stuff, a couple hours in the evening, and all day Saturday and Sunday. Now that I’ve retired, I go out there and work from about 9 a.m. to 12 p.m. That’s plenty.”

The stoneware clay that Ham uses has come from the same location for many years, and he swears it’s the best there is.

“We’ve been getting clay out of the same place in Perry County for over 100 years,” Ham said.

After the clay has gone through a process to remove unwanted rocks and more, Ham is able to start making items with it.

He starts out by getting the amount he needs for a particular item, and after making it the correct size and shape, he puts it on his wheel to turn.

For a large bowl, it only take a few minutes for him to create the work and add detail. Then it’s time to dry. After days of drying, he is able to glaze the item.

Ham said he will continue to make items until he has well over 100, then he will put them in the kiln to fire for nearly a day. The items will then sit in the kiln for a couple more days before he is able to see the final product.

Because it’s clay, Ham said you never know what’s going to happen in the kiln.

“If somebody wants something, you always make two or three,” Ham said. “If you just make one, something is going to happen to it.”

Ham enjoys working out in his shop, but to him, it’s not exactly relaxing.

“Everybody talks about it being therapeutic, well it ain’t with me. It’s more like work with me,” Ham said chuckling. “Get out there and make 50 pieces Saturday, it ain’t too therapeutic. But I enjoy it.”

Even if it is stressful sometimes, Ham said it’s nice to get a compliment on a piece that someone loves.

“It’s nice [for someone to compliment a piece],” Ham said. “They’ll tell you how pretty it is, and I tell them I’ve had a lot of practice.”

Ham said he has more than 50 years of experience, and he doesn’t plan to quit any time soon.

Ham’s work can be found at various arts and craft shows, and on Facebook at Ham Pottery.