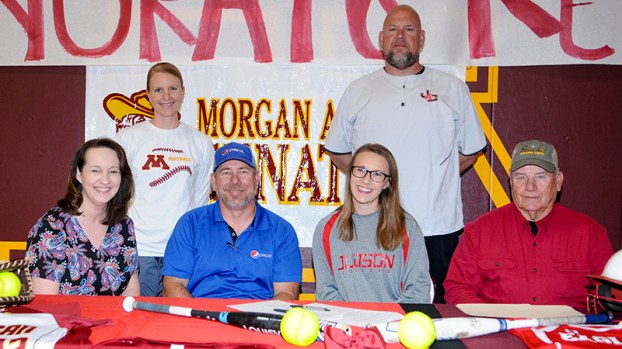 McKenzie Horton was surrounded by her family and coaches as she signed her letter of intent to play softball at Judson College. Standing are Morgan Academy softball coach Cherie Grimes and Judson College softball coach Tom Hannah. Siitting on Mckenzie’s left are her parents Tracy and Doug Horton, and her grandfather Jamie Horton is seated to her right.

McKenzie Horton, a senior at Morgan Academy, saw her dream come true Thursday, as she signed a scholarship to play softball at Judson College in Marion.

Horton signed her letter of intent during a ceremony alongside her parents, grandfather, coaches, teammates and peers.

Horton’s father, Doug, who has helped coach her along the way, said Thursday morning was a proud moment.

“As a dad, I’m proud I get to go and watch her play four more years,” he said. “It makes me real proud to see that all the hard work she’s put into it has come around for her to get to do what she wants to do.”

Tom Hannah, Judson College’s head softball coach, said McKenzie will be a great addition to the team next season.

“Any time you can get a quality girl that’s a good player on top of that, that’s what you want, and she meets all of that,” Hannah said. “She’s just a great kid, has a great family and is a really good player.”

Hannah said McKenzie is a versatile player and can play anywhere on the field for Judson.

“We will be able to use her all over the field at any time,” Hannah said. “She’s very versatile. She can play just about anywhere. When you get somebody you can put in and plug in anywhere on the field, it’s a plus. We’re just excited to have her.”

At Morgan, McKenzie has played mainly shortstop and first base.

“I’ve been everywhere,” she said. “I’ve been at shortstop and first, and those are my two favorite.”

Horton has been playing softball since she was a little girl.

“She was five years old when she picked up her first bat and ball,” Doug said. “Pretty much we’ve coached her since she was in the five and six-year-old league. We just kind of coached her all the way up and through high school.”

“It’s fantastic. I’ve been wanting it for a long time,” he said. “It means the world to me.”

Jamie said he can’t wait to see her step on the field for Judson for the first time.

“If I start to mess up, they’re always there to help me and correct me,” McKenzie said. “We’ve gone through a lot of coaches, but they have always been like my rocks. They’ve always been there for me.”

Horton said she liked Judson College because it is a smaller college that is close to home. She said she plans to study elementary education and is excited that Judson is a Christian college.

Judson plays in the United States Collegiate Athletic Association (USCAA), and the team is in the middle of its season now. McKenzie will join the team in the fall.

“It’s a big difference, and I’m really excited,” she said. “I can’t wait to step it up a notch. High school is fun, but college is going to be even more fun – more competition and we just get to push through it further.”

The Morgan Academy track and field program hosted a massive AISA meet this past Monday with more than 15 schools... read more