Boys and girls basketball teams one game away from Final Four 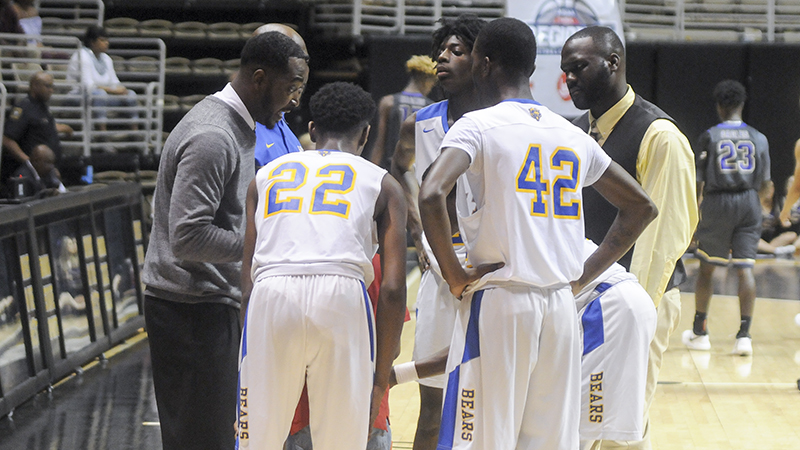 Keith boys head coach Clifton Reeves goes over the next play for the Bears in their 61-57 overtime win over Goshen in the regional semi-finals this past Friday. The boys will play after the girls game in the Elite Eight round on Thursday morning in Montgomery.

The only two remaining basketball teams from Dallas County in the AHSAA state tournament are the boys and girls teams from Keith High School in Orrville.

Both teams are just one game away from advancing to the Final Four in Birmingham. The Lady Bears will face R.C. Hatch at 9 a.m. in the Dunn-Oliver Acadome at Alabama State University in Montgomery, and the boys team will face Aliceville immediately after the girls game at 10:45 a.m.

The Lady Bears defeated the Southern Choctaw Lady Indians 54-40 in the regional semi-finals. The girls have been playing well together, especially on defense, since the end of the regular season. After winning their area tournament on the road, the Lady Bears have taken care of business in each elimination game on the way to this Elite Eight matchup. Head coach Cecil Williams said he wants his team focused heading into the regional finals.

“I want them to stay focused,” he said. “The biggest thing is the mental aspect of it, because this will be our fourth time playing them. Physically, we know what we’re capable of. We just need to stay focused for four quarters to achieve what we’ve worked for.”

The Lady Bears lead the season series against the R.C. Hatch Bobcats 2-1. According to Williams, aggression on defense, boxing out and rebounding will be the keys to facing Hatch again.

The boys team will also meet a familiar opponent in the Aliceville Yellow Jackets on Thursday morning.

“We feel really good about our matchup with Aliceville,” Keith boys head coach Clifton Reeves said. “We’ve played them three times already this season. They’ve beaten us twice and we’ve beaten them once, so we matchup pretty well.”

According to Reeves, the Yellow Jackets are a good shooting team and guarding the 3-point line will be a point of emphasis for the Bears. Aliceville also has a tough defensive press that Keith will have to be prepared for.

The boys team is coming off an emotional 61-57 overtime win against the Goshen Eagles to make it to the Elite Eight round. The energy from that game has carried over and the excitement has spread throughout the school.

“Keith basketball has always been a pretty big thing. Both the boys and girls team gets great support from our fan base,” Reeves said. “You need that during this time of the year because that crowd cheering you on gives you that extra boost when you’re down or things might not be going your way. But when you see the crowd and that fan base still cheering, it’s very big for the players.”

In the semi-finals, the late start prevented many Keith fans from making the trip to Montgomery. But since the regional final games will be in the morning, Keith is loading up the fan buses and taking as many supporters as they can with them to the game.

“Just about the whole school is signed up for the fan buses tomorrow,” Williams said. “I know a lot of the community will come out because both teams are in the finals, so it’s going to be a lot more support than we had for the semi-final game.

The Keith Bears basketball program, its fans and supporters are excited to see what they can do. Both teams are one win away from the Final Four and a trip to Birmingham.

“It’s exciting to be one of the eight teams in 2A playing around this time. That’s an accomplishment within itself, so it’s just more exciting,” Reeves said. “I told [the players] to go out, play free and enjoy the moment.”