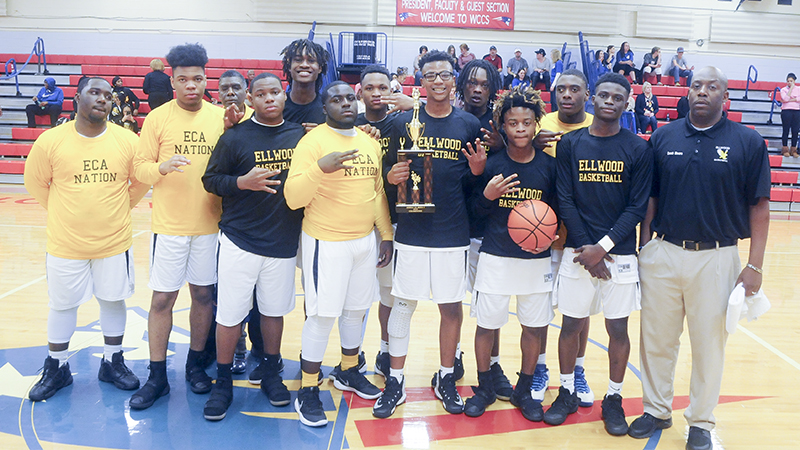 Ellwood Christian received the first-place trophy after defeating Maplesville 73-56 in the Class 1A Area 5 title game on Friday night.

“Tonight was a pretty big game,” Ellwood Christian head coach Willie Shears said. “It’s hard to beat any team three times. It was hard to get the boys up to keep playing, but they found a way to muster up enough energy to pull out the win.”

The Eagles went undefeated against area opponents during the season, and continued that streak through the area tournament.

In the championship game, the Eagles jumped out to a 17-13 lead in the first quarter and continued to widen the gap between themselves and the Red Devils.

“This is a great accomplishment for my team,” Eagles forward Justin Bufford said. “We just try to get better every day. We came a little bit short last year, but we’re trying to go all the way this year.”

Bufford started the first half strong with 18 points. Just three days before the title game, he had to leave the semi-final game against Isabella early because he twisted his ankle. He managed to still put together one of his strongest games in the title game.

Bufford finished the game with a team-high 23 points.

“Today, he played really well,” Shears said. “He’s a warrior, so he’s going to fight through it.”

Bufford’s teammate Loveless Craig had a big night scoring as well. He finished the game with 21 points. Craig was able to work inside and finish second chance opportunities to rack up his scoring total for the game.

“We see a lot of easy buckets, so me and Bufford just executed and scored the points,” Craig said.

The Eagles defense made scoring tough for the Red Devils. Even when they did find a way to score, Ellwood would respond with a run that pushed Maplesville further behind. The Red Devils did make six 3-pointers in the game, but the team was already down 20 points at the start of the fourth quarter.

Winning the area title was just one of Ellwood Christian’s goals this season, according to head coach Willie Shears. The win sets up a home game for the sub-regional game next Tuesday, Feb. 13. A game that decides if they will advance to the regionals in Montgomery.

“We’ve accomplished one of our goals,” Shears said. “Now we’re on to another goal.”

The Keith Lady Bears won the Class 2A Area 7 title with a 46-43 win over R.C. Hatch on Friday night at R.C. Hatch High School. Shatavia Moore led the team with 14 points, while Ambreya Snow scored 12 and Jakayla Pettway had 8. Keith will host the sub-regional game on Monday, Feb. 12 against Verbena.

The Southside Panthers lost 59-42 in the Class 3A Area 5 championship game to Prattville Christian Academy on Friday night. The Panthers will travel to play Central Tuscaloosa in the sub-regional on Tuesday, Feb. 13.

The Dallas County Hornets lost 102-61 in the Class 5A Area 6 title game to Calera High School on Friday night. The Hornets will travel to play Booker T. Washington High School in the sub-regional on Tuesday, Feb. 13.